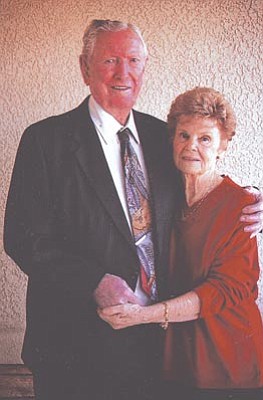 James and Arlene Fackrell are celebrating their 70th wedding anniversary. They met on a blind date in high school. When Jim saw Arlene, he told his friend "I am going to marry that girl." A year after they graduated high school, they were married on Valentines Day 1941 in Huntington Park, Calif. Still today, when they look at each other, they both have that same old sparkle in their eyes.

Both of their parents objected to the marriage and did not think it would last. It did not take long to see they were wrong. They planned on a honeymoon in Santa Barbara, Calif., but it was raining so hard, the Pacific Coast Highway was flooded. They made it as far as Santa Monica, and then had to turn back to their rented court in East Los Angeles, only to find a bed full of rice, compliments of Arlene's sister.

They moved to Prescott, from Downey, Calif., in 2006. They have four children, Claudia (Joe) Jay, Carol (Jack) Diffey, Curt (Amy) Fackrell of Prescott and Cathy (Tom) Davis of Woodland Hills, Utah. They have eight grandchildren, many great-grandchildren and one great-great grandchild.

Jim and Arlene will celebrate their anniversary with family at the Hassayampa Inn in Prescott.