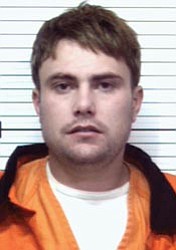 Prescott police spokesman Lt. Andy Reinhardt said Thursday that the man Prescott police detectives arrested in connection with a body found in a burnt-out home "did admit to detectives that he killed her prior to lighting the house on fire."

An officer booked Zachary Stuart Sutton, 24, into the Yavapai County Jail in Camp Verde on Wednesday on charges of first-degree murder, arson of an occupied structure and interference with judicial proceedings.

"We knew Sutton was the boyfriend of the female renter. He was our primary person of interest," Reinhardt said. "They've had prior incidents of domestic violence, she had an order of protection against him, and he was not to be at that location. We received information that he was seen at her home the night before the fire."

Police await notification from the Yavapai County Medical Examiner about autopsy results before releasing the name of the woman found in the home or how she died, Reinhardt said.

At 6 a.m. Wednesday, firefighters and police found the small home in the 600 block of Campbell Street engulfed in flames, according to Lt. Ken Morley of the Patrol Division for the Prescott Police Department. Firefighters extinguished the flames before they spread to surrounding structures or neighboring homes.

When police answered the call, a woman who directed them to the home told officers she had started her car just before 6 a.m. in a nearby apartment complex parking lot when she saw smoke coming from the home, heard a smoke alarm, saw the fire and called police, according to the police report.

The woman told officers the rear door to the home was open, and a small dog ran out that she later took to her apartment.

Officers also spoke with a man in a nearby home who told them a woman who had no children, but did have some dogs and a cat, rented the home that had been on fire.

After the fire was put out, investigators found the bodies of two dogs in the home, and a Prescott Animal Control officer took them from the scene.