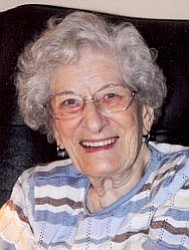 Helen Nelson passed away on Jan. 6, 2011, at the Las Fuentes Care Center in Prescott, Ariz. She was born on March 30, 1915, in Morris, Minn., the second child of Louis and Inga Marie (Paulson) Halvorson.

She grew up in Morris and St. James, Minn. Her mother died of cancer in 1924 and her father passed in 1929. After their mother's death, Helen and her brother Paul were raised by their beloved aunt, Anna (Paulson) Burns, and uncle, Ole Paulson. Anna Burns was a country schoolteacher who instilled a strong desire for education in the two children.

Helen graduated from St. James High School in 1933. She attended St. Olaf College for two years and graduated in 1938 from Kahler School of Nursing in Rochester, Minn. She worked as a registered nurse in Illinois in the early 1940s at Madison, Wis., General Hospital in the 1950s and 1960s and in Tucson, Ariz., in the early 1970s. Her skills as a nurse earned her the respect of co-workers, who often marveled at her discipline and good disposition.

In 1940, she married Everett William Nelson, who preceded her in death. They lived in Chicago, Madison, Anchorage, Tucson and Prescott. Helen and Everett had three children, Kent Wayne (deceased), Jonette Sue (deceased) and Jon Paul, who survives in State College, Penna. She also is survived by five grandchildren and seven great-grandchildren.

Helen was a good and caring friend and a loving mother and grandmother. She enjoyed pine needle weaving, quilting, china painting, playing Scrabble and watching sports on TV, especially Arizona's professional teams. She was a devout Lutheran and an active member of the American Evangelical Lutheran Church.