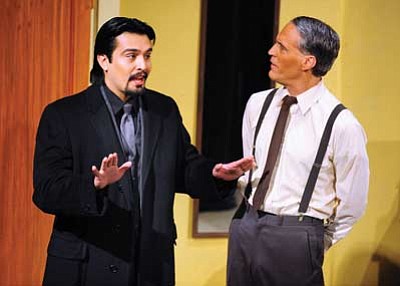 Les Stukenberg/The Daily Courier<br>Zach Larez as Bob Schroeder and Jeff Whitman as Chris interact during the opening scene at the dress rehearsal for the PFAA play “Beau Jest” that opens tonight.

PRESCOTT - If Zach Larez's car had not broken down in Prescott two years ago, he might be performing in Hollywood instead of making his stage debut in Prescott.

In addition to seeing Larez's first performance in front of a live audience, people who attend Prescott Fine Arts Association's new play, "Beau Jest" (whose title is a nod to the 1924 book "Beau Geste" by P.C. Wren), will see a number of other firsts for the theater company.

"I'm the only one who has performed here before," said Parker Anderson, who plays Joel Goodman in the play involving a comedy of events surrounding a young Jewish woman and her family in 1990 Chicago. "It's the first play (in which) I've ever had to speak Hebrew."

None of Anderson's five fellow actors have performed on the PFA stage. And director Jon Meyers, PFAA executive director, is directing his first play since taking over the theater's reins.

"A committee selects the plays, and I suggested 'Beau Jest,'" Meyer said during a recent dress rehearsal. "And they asked who would direct it. And I said, 'Me.'"

Meyer previously acted in the play about 15 years ago in Cleveland and said he never forgot how fun it was.

"It's a great play, and it's wonderfully written," he said about playwright James Sherman's script.

Sarah Goldman, played by Layla Tenney, is under pressure to find a good Jewish boyfriend. She has a boyfriend, Chris Kringle, played by Jeff Whitham, but he is not Jewish, and her parents don't approve. Liz Toone and Sal Casticone play the cantankerous parents, Miriam and Abe Goldman.

So Sarah hires Bob Schroeder, a non-Jewish man from an escort service, to pretend he is her Jewish doctor boyfriend. Once the family meets Bob, played by Zach Larez, the laughs start coming and don't stop.

For those unfamiliar with certain Jewish words, theater staff included a glossary on the back of the program.

When Larez's car broke down two years ago, he was en route to Hollywood to further his professional film career. But fate intervened, and he found himself living in Prescott.

After rehearsals started for "Beau Jest," he discovered he had a few things to learn about stage acting compared to film acting.

"Film is all about subtleties and nuances. Here it's all about bigger movements and gestures and using a louder voice," Larez said. "On the screen, you never play for laughs, and you don't try to be funny. It just doesn't look right. Either the audience gets it or they don't. On stage, you have to act out for the laughs."

The one-set, two-hour play covers a period of four weeks - the length of Sarah and Bob's charade - and all the shenanigans happen in Sarah's apartment.

"This is just a good old-fashioned fun play," Anderson said.

Costume designer Karen Murphy researched 1980s interior designs and, with her son Cason, set-construction crew leader, designed the apartment set with exacting detail and the color palette of the era.

Tickets are sold at the theater box office, online at ww.pfaa.net or by calling 445-3286.