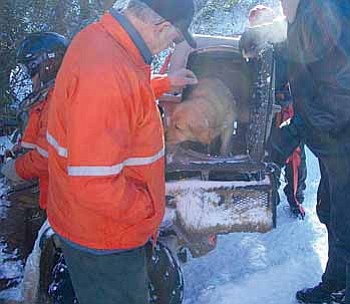 On Friday, the sheriff's Response Team found a man, 62, his grandson, 10, and a dog who had gone camping in the Bradshaw Mountains west of Mayer, got stuck in 2 feet of snow and stayed in their vehicle to keep warm.

Rescuers took them to the Mayer sheriff's station where they reunited with family members. The man told deputies he was concerned about snow accumulation when they arrived Tuesday at the campsite, but decided to "stay and play" rather than leave, said Dwight D'Evelyn, spokesman for the Yavapai County Sheriff's Office.

On Sunday, a Jeep posse crew found two adults and their dog stranded in a vehicle four miles outside Crown King on Senator Highway after forest patrol deputies called them Saturday and learned they were out of gas and had no heat. Deputies couldn't find them that night because road conditions were so bad, D'Evelyn said.

Saturday afternoon, YCSO searchers also learned that a group of three adults that had been reported stranded along Forest Road 192 outside Crown King the day before had all made it to safety early that morning, thanks to a Crown King resident, but no one advised the sheriff's office until late in the day, so deputies were tied up in an unnecessary rescue, D'Evelyn said.

Sunday evening, a hiker who had been reported missing after leaving her group near Bell Mountain Trail was found safe in her hotel room. The woman told the sheriff's office that other hikers helped her get to safety.

"In almost all cases, those requiring help were from outside Yavapai County and had come to this area to enjoy the scenery and snow," D'Evelyn said. "Most already had an understanding of the weather predictions before traveling but decided to move forward with plans anyway."

No one was prepared with proper supplies or equipment for the snow and cold weather conditions, but all made it to safety, thanks to the YCSO, volunteers, and other concerned citizens, D'Evelyn said. GPS-enabled cell phones were of critical help in two of the rescues.

In the case of the missing hiker found at her hotel, she violated a classic rule when she separated from a group in the wilderness, D'Evelyn said.