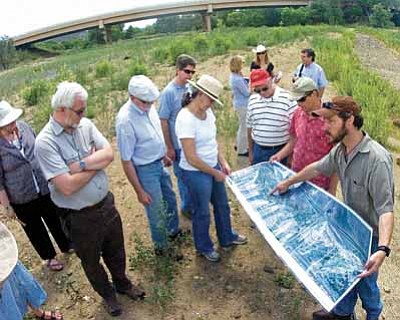 PRESCOTT - Despite its humble beginnings here two decades ago, the Prescott Creeks Preservation Association has gradually become a leading advocate for water quality and conservation efforts in this area.

In 1990, the nonprofit organization was founded through the efforts of residents Bette Bridgewater, Betty Siegfried and retired forester Jay Eby, who established the community's annual Granite Creek Clean-up. To this day, with the help of City of Prescott sanitation trucks, hundreds of volunteers spend one day each year picking up tons of trash that litter the creek beds.

Doris Cellarius, current chair of Prescott Creeks' board of directors, said Siegfried, now 84, was inspired to form the group after taking a trip to the famed River Walk in San Antonio, Texas, years ago.

"She saw how the creeks in San Antonio contributed so much to the vibrancy of the local businesses - the cafés and the shops and the tourism," Cellarius said.

Prescott Creeks Executive Director Michael Byrd added that the founders also recognized Prescott exists because of the city's Granite Creek, which is, in many ways, a lifeblood of the community.

"They said, 'Well, Granite Creek is by no stretch of the imagination the San Antonio River, but we could bring this concept back to Prescott and do something similar to help the community members connect with the creek,' " Byrd said.

As the early-1990s progressed, Prescott Creeks' founders coordinated the construction of a nature trail along Granite Creek with the help of the city and Prescott College as well as those who lived and worked along the creek. It became the origin for Prescott's Greenways Trail, which currently winds through the downtown area.

"Each entity kind of took responsibility, or ownership, if you will, for a little stretch of trail along a stretch of the creek," said Byrd, who joined Prescott Creeks 15 years ago as a volunteer and eventually assumed its leadership reins.

After the trail was finished, Byrd said the original founders did not have another project planned and that the organization essentially became dormant until new organizers arrived.

Just three years later, in its seminal moment of 1995 under the guidance of Eric Glomski, Prescott Creeks negotiated a 25-year lease with the city for stewardship of Watson Woods.

In 1996, the 125-acre Watson Woods Riparian Preserve, located off Prescott Lakes Parkway and North Highway 89, was established to protect a large swath of cottonwood and willow trees.

"In a lot of ways it is, and at the time was, the best remaining piece of Granite Creek in terms of having a functional floodplain," Byrd said. "Despite those abuses, that water could spread out through the cottonwood gallery forest where a lot of wildlife accumulated."

As recently as the past two years, Prescott Creeks has re-vegetated pieces of the preserve with the planting of more cottonwood and willow trees and re-worked its stream channel to improve the water quality of nearby Watson and Willow lakes.

"One of the major things that Prescott Creeks has done for years is planting trees and correcting the damage done," Cellarius said. "It was a place badly in need of restoration because of historic dumping there and the level of the creek had been changed by gravel mining."

The contingent also focused on bolstering recreational opportunities for visitors to the preserve. Each year, thousands of people hike, run, bike and/or conduct bird-watching activities on the Peavine Trail network that passes through the area.

Once the preserve was established, Prescott Creeks fixed its gaze on improving the quality of the rest of the watershed upstream of Watson Woods, which directly impacts the downstream habitat.

Ann-Marie Benz, Prescott Creeks' outreach and communications director, said the upper portion of the Granite Creek watershed is about 60 square miles. It remains a focal point for restoration efforts.

"As we've moved up into the upper watershed and really started to learn about it, we've really moved into a whole different area for planning of water quality," Benz said. "Keeping riparian areas clean, accessible and available to the public is key."

In order to achieve watershed protection, an important aspect for Prescott Creeks remains its educational outreach programs. In 1999, the group installed creek identification signs throughout Prescott to mark the creeks where they intersect with roads and encourage members of the public to respect their waterways.

From 2000-02, Prescott Creeks coordinated the design and implementation of mitigation efforts to compensate for environmental impacts associated with the construction of the Prescott Lakes Parkway bridge that crosses the Watson Woods preserve. It was at that point that the group and its volunteers began monitoring the watershed for contaminants by collecting water quality samples.

Prescott Creeks eventually developed a master plan for restoring Watson Woods and published its Creek Observation Guide for the public.

In 2004, the National Audubon Society designated the approximately 2,000-acre Watson and Willow lakes ecosystem, which includes Watson Woods, as an Important Bird Area where bird-watchers flock for recreational birding and official bird counting.

A short time later, the Arizona Department of Environmental Quality (ADEQ) and the Environmental Protection Agency (EPA) designated Watson Lake and Granite Creek as Impaired Waters that required attention because of dissolved oxygen pH nutrients and bacteria in those waters.

"We wanted to know where the pollution (whether manmade or natural) was coming from, and so we added the goal of cleaning up the creeks," Cellarius said.

Byrd added that those pollutants have "many sources in many locations" in this area.

"We all have a role to play in improving conditions, whether that be maintaining our yards in better condition or how, when and where we wash our vehicles," he said. "It's an urban storm water issue where it's just pollutants coming off the landscape."

By 2005, Prescott Creeks had developed an updated Restoration Plan for the Watson Woods preserve and furthered its goals to educate the public about the harms of contamination.

Three years ago, the group labeled the city's storm drains with catchy circular seals that include the words, "Rain Only! Drains to Creek," which encourage folks not to dispose of trash in them.

Since 2008, the work on Watson Woods has ratcheted up. Prescott Creeks implemented an updated Watson Woods Restoration Plan designed to restore habitat and creek channels. And it has stepped forward to improve water quality through testing in Granite Creek and its tributary creeks as well as Watson Lake with state assistance.

In 2009, the Watershed Improvement Council was formed to administer the planning phase and implementation of an on-the-ground project that's part of ADEQ's Targeted Watershed Improvement Plan grant in the Upper Granite Creek Watershed. The council includes representatives from the city, Yavapai County and the U.S. Forest Service, among others, to determine how to clean up pollution in the watershed.

"That's a major shift in the last five years," Cellarius said. "We have learned that restoring the riparian areas of our creeks does make the water cleaner. We need to do more of that."

Within the past 1-1/2 years, Prescott Creeks has continued to move forward with the restoration and watershed monitoring at Watson Woods. Visitors to the woods will now notice more abundant willow trees, native grasses and wildlife.

While Prescott Creeks has received many grants from state agencies to improve the watershed, it has also formed partnerships with foundations and local businesses to progress with its work. In the future, it is those partnerships as well as its members, donors and volunteers that will ensure the organization thrives.

"As our community develops and changes, we must figure out how to promote sustainability," Byrd said. "As an organization, we've been fortunate to have strong grant support and membership-based donations."

For more information about Prescott Creeks and/or how to become a volunteer, donor or member, log on to www.prescottcreeks.org or call 445-5669.