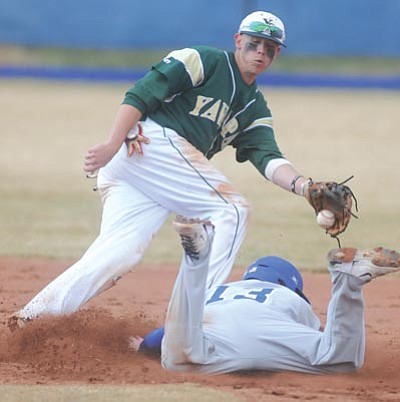 The Yavapai College baseball team had its chances versus visiting Salt Lake City Community College in a doubleheader at Chino Valley High School on Thursday - especially in Game 2 - but couldn't get the hits when it needed them most.

The Roughriders, who were playing at CVHS because their field was unplayable due to recent winter storms, dropped the opener 7-2, then the nightcap, 4-2.

"Offensively we really struggled," YC coach Sky Smeltzer said. "We had our opportunities, but lack of offensive production (cost us).

In Game 2, Josh Anderson was 2 for 3 with an RBI, while Piazza also drove in a run.

David Zamura, who relieved starter Matt Schmit in the fourth inning, allowed for runs on two hits in 2 2/3 innings.