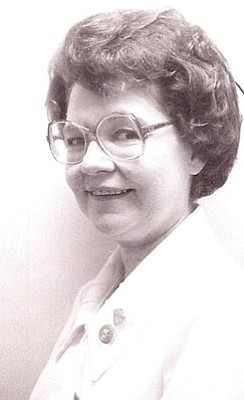 Her funeral service will be at 11 a.m. Tuesday, Feb. 22, 2011, at the First Evangelical Lutheran Church on Smoke Tree Lane. A visitation will be an hour before the service from 10 to 11 a.m. at the church. Burial will be on Wednesday, Feb. 23, 2011, at the National Cemetery in Phoenix, Ariz.

Audrey Lucile Wellman was born to Albert and Alma (Kraig) Wellman on April 11, 1926, in Sargent County, N.D. She was baptized and confirmed in the Lutheran faith.

After Audrey's graduation from high school in Havana, N.D., she entered the U.S. Cadet Corps in Jamestown, N.D., where she began her training to become an R.N. She graduated from the Sisters of St. Joseph's School of Nursing in September of 1947.

She moved to Britton, S.D., where she began her first job in the nursing profession. While in Britton, she met and married Eugene Bremmon on Sept. 1, 1949. Their three sons were born while they lived in South Dakota.

In 1962, the family moved to Prescott, Ariz. Audrey worked at the now YRMC for 25 years - 23 years as head nurse of the emergency room. In 1987, she began working at the Arizona Pioneers Home as night supervisor. Her retirement was in September of 1992.

In 1988, Audrey was listed in Who's Who Among Human Services Professionals. Her hobbies were reading and crocheting. In recent years, she spent much time on her computer.

She is survived by her sons, Braden (Belinda) of Prescott and Bentley (Irina) of Phoenix; a granddaughter; grandson; a stepgrandson; and six great-grandchildren. She is also survived by two brothers, Albert (Elsie) Wellman from Rapid City, S.D., and Cecil (Valerie) Wellman from San Antonio, Texas; and her sister, BettyAnn (Herb) Tillapaugh of Wickenburg, Ariz. She was preceded in death by her parents, her husband and an infant son.

In lieu of flowers, the family suggests memorials be made to the First Evangelical Lutheran Church in Audrey's name.