Tri-cities' crime rates on the decline 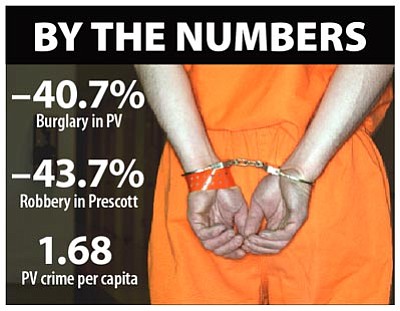 At a recent Prescott Valley Chamber of Commerce breakfast, the town's mayor, Harvey Skoog, told business owners that the incidence of crime in Prescott Valley has dropped in the past six months.

"We probably have one of the lowest crime rates in the state," Skoog said Thursday. "Although I wish we were at the bottom."

Prescott police note that the incidence of murder, robbery and burglary all declined sharply in the last six months of the fiscal year as well, said Lt. Tim Fletcher, spokesman for the Prescott Police Department.

Skoog and Bonney attributed the decline to residents doing what they can to prevent crime, people looking out for each other, increased police visibility, and a low crime rate when compared to other towns of similar size throughout the state. A number of business owners in the Safeway Shopping Center on Highway 69 in Prescott Valley agreed.

"We don't have much crime here," said Waugh, a longtime resident who remembers when there were only four volunteer police officers who patrolled during the day. "We keep our blinds open while we're working so the officers who come by can see in and know we're fine."

"We've been very aggressive in our efforts to educate people on how to keep themselves, their family and their businesses safe," Bonney said. "Simple things, like locking your vehicles, doors, staffing and placement of cash registers, will discourage criminals seeking an easy target."

"I remind people that even though our crime rate is low, we need to keep our car doors locked and the doors to our homes locked to do what we can to prevent crime," Skoog said.

Lori Roush, assistant manager of the Smoke 'Em tobacconist and gift shop, said the businesses there all watch out for each other.

"We have good neighbors - they watch out for us, and we watch out for them," said Roush, noting that there's not much crime near her store.

Bonney said strong participation in the town's Block Watch program shows that people are monitoring what goes on in their neighborhoods and notifying police when they see something suspicious.

"We haven't had any crime here at all," said Jim Scordato, manager of the Papa John's at the Safeway Shopping Center. "There always seems to be a law enforcement presence in this area. They're high-profile and that's a big thing."

Officers have workstations in their patrol cars so they can complete their reports where they are visible in the community instead of coming in to the station to type them up, Bonney said. The department also offers a transcription service so officers can dictate their reports and quickly get back to patrolling their beats.

"We have police officers here all the time," said Justin Johnson, owner of Sushi J Express. "I haven't seen any crime here at all, but I see the lights going off as people go through the intersection all the time."

Staesi Hembree, owner of Jarz of Clay, said she feels safe even at night when she's at her store in the Safeway Shopping Center.

The statistics Prescott Valley sent to the FBI for Unified Crime Reports did show an increase of two more reported rapes over the same time period than last year. The number of murders remained flat, and there was a slight increase in thefts.

The Prescott Valley Police Department's Violent Crimes Against Women Unit was developed to educate the community about domestic violence, investigate crimes against women, intercede to prevent incidents from escalating, and get victims in touch with community resources they need, Bonney said.

Chino Valley police statistics showed an increase of one more reported rape and one more theft over the same time period, Garcia said. There were no murders or arsons during that time period, and burglaries remained flat as well.

"Considering the state of the economy both nationwide and here in Chino Valley, one would expect the crime rates to be climbing at alarming levels," Garcia said. "In spite of the deep cutbacks that our department has experienced, our officers continue to work closely with the citizens of Chino Valley to monitor and report suspicious activities in our community, thus creating safe and secure neighborhoods."

Garcia noted the police force has been reduced from 31 officers to 27, and work hours have been reduced by 10 percent.

"One statistic that is noteworthy is that auto theft (in Prescott) went up by 10 during that period of time over the same period of time last year," Fletcher said. "The Prescott police department, like the Prescott Valley police department, wants people to be diligent in their own crime prevention efforts by locking their vehicles when they are way from them, paying attention to what's going on in their neighborhood, and becoming active in their block watches."

In response to an increase in thefts, both police departments are doing what they can to increase their visibility in the community and educate residents on what they can do to make themselves, their businesses and their property less attractive targets.