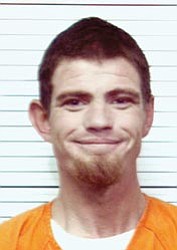 Prescott police arrested a man Tuesday on charges of aggravated assault against a police officer after he allegedly pulled a knife on an officer trying to get him to move from where he lay across the northbound lane of traffic in the 100 block of N. Montezuma Street.

An officer booked Richard Wayne Anderson, 27, of Chino Valley into the Yavapai County Jail on charges of aggravated assault against a peace officer, resisting arrest, and obstructing a public thoroughfare. At 11:41 p.m., an officer patrolling the downtown area saw two people in the roadway directing traffic out of the northbound lane of Montezuma Street, a man lying across that lane, and cars swerving around him.