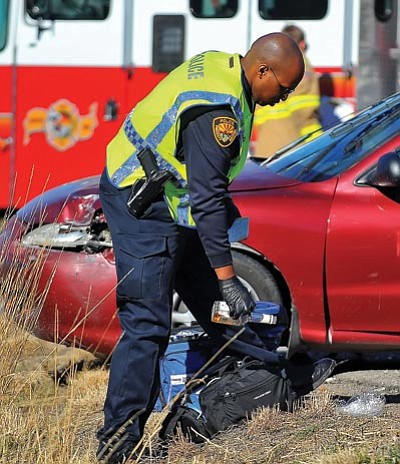 A Yavapai County Sheriff's deputy investigating a vehicle burglary in Bagdad found a news photo later that week in The Daily Courier that helped the deputy locate a suspect's vehicle and later identify the suspect.

On Sunday, Jan. 16, a deputy answered a call about a vehicle burglary in Bagdad.

The woman told the deputy that she had parked her PT Cruiser in the rear parking lot of a restaurant, but when she checked her car at about 11 p.m. that Saturday her purse and keys were missing, said Dwight D'Evelyn, spokesman for the Yavapai County Sheriff's Office. The woman had left her car unlocked because she did not have a working door key on her.

During the investigation, deputies learned the woman's stolen Visa card had been used at 12:30 a.m. Sunday, Jan. 16, at the Conoco Gas Station in Bagdad and at three locations in El Mirage before 6 a.m., D'Evelyn said.

Four days later, the deputy assigned to the case read the Courier and saw a collision photo showing a Hyundai similar to the one pictured in the surveillance photo, D'Evelyn said.

After looking closer, the deputy noticed some of the same hood markings in the news photo and it mentioned two people in the vehicle were from El Mirage, which was an important connection for the deputy, D'Evelyn said.

The deputy spoke with Prescott police who were investigating the collision, made arrangements to examine the Hyundai at a tow yard, confirmed the hood markings and identification matched the car in the surveillance video, and found some of the woman's stolen property, D'Evelyn said.

After obtaining driver's license photos of the people riding in the Hyundai at the time of the accident, the deputy identified 25-year-old Christopher Shriver as matching the description of the suspect in the gas theft from the Conoco in Bagdad.

A store clerk also identified Shriver from a purchase made at the convenience store next to the Conoco before the gas theft, and the deputy found video of Shriver using the woman's Visa card at the WalMart in El Mirage.

On Friday, Feb. 4, the deputy learned El Mirage police had detained Shriver on a fraud investigation, so the deputy drove to meet with their officers, and took Shriver into custody.

After interviewing Shriver, the deputy found the woman's remaining property which had been dumped in a Bagdad parking lot, D'Evelyn said.

The deputy booked Shriver into the Yavapai County Jail in Camp Verde on charges including burglary and taking a credit card from another.

Shriver remains in-custody on a $7,000 bond and there is the possibility of additional charges, D'Evelyn said.