Tween playwrights audition kid and adult actors for their plays 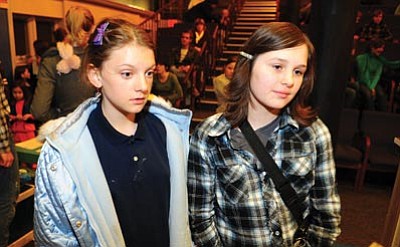 Les Stukenberg/The Daily Courier<br>Young playwrights Sage Taylor and Sierra Cottle talk about their experiences before the end of auditions for their plays that will be performed at the Prescott Fine Arts Association theater later this year. Taylor wrote “The Right Move” and Cottle wrote “Periwinkle.”

PRESCOTT - As solos and in pairs, children and adults stepped in front of about 60 people Tuesday night to audition for plays written by children as young as 10 years old.

"We're just walking on a cloud to see this become a reality," said Jon Meyer, executive director of the Prescott Fine Arts Association (PFAA.) "It's really phenomenal to see."

This past November, the PFAA board of directors approved Meyer's idea to start a Young Playwrights Festival for county children in grades K-12. About 22 children submitted scripts to a selection committee, which chose 12 plays for production.

"It was kind of nerve-wracking to see people audition for my play," Sage said during auditions. Her play, "The Right Move," is about a movie star who loves chess, but doesn't think "chess is cool."

"It's a conflict because he doesn't think he can do both," she explained. However, what audiences will see on stage is not the play she originally wrote.

The hardest part of the auditions for Sage was deciding who would play her leading man.

"I wanted (teen idol) Justin Bieber as the star," she explained. "But I didn't really see anyone that fit him."

After the end of auditions each night, the playwrights huddled with their directors - experienced adults who work side-by-side with each playwright - to compare notes and agree on who would play which part.

"It was difficult trying to make sure someone will fit the role," said Sierra, whose play "Periwinkle" is about a daughter who opposes her family's cattle ranch. "But it was exciting wondering if that person will work."

Sierra previously performed in plays, but this is her first experience writing one.

"I just kept re-reading it and re-writing until I just said, 'No more,'" she said, explaining how she decided her play was finished. "It was a lot of work. But it was a lot of fun."

Cason Murphy, the technical director for the festival, handed one- and two-page script excerpts to the actors to read.

"They're just random scripts," he said. Children and adults read from the same three scripts: "Winnie The Pooh," "The Emperor's New Clothes" and "Peter Pan."

"Some of the plays have talking animals and people coming from space," said Tiffany Antone, festival coordinator, explaining the choice in scripts. Antone also is directing one of the plays: "My Hairs Are Numbered."

"As a director, I look for someone who speaks clearly, is comfortable on stage, and has a good energy to be flexible and take direction," she said.

"I love acting better, but I'd write another play," said Sage, who also auditioned for a role.

"This was a fun experience," Sierra said. "I'd do it again."

The 12 plays show at 2 and 6 p.m. Sunday, March 6, at the Boys and Girls Club, 335 E. Aubrey St., in Prescott. To read more about the Young Playwrights Festival and other PFAA programs, visit www.pfaa.net.