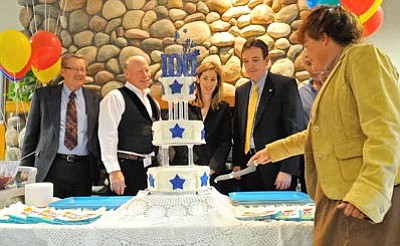 PRESCOTT - Like the pioneers who call it home, the Arizona Pioneers' Home and Hospital for Disabled Miners weathered decades of challenges to reach its 100th anniversary Tuesday.

It is one of only two state-supported homes for the aged in the country, and some state legislators have been periodically questioning its value for decades.

"Do we really need it?" asked then-Rep. James Ratliff, R-Sun City, in a 1976 newspaper article. "It's not a home for pioneers anymore, and it hasn't been for a long time. It looks like a duplication of services, and we're competing with private industry."

But anyone who visits the Pioneers' Home long enough to chat with its residents learns that it still is a home for Arizona's pioneers.

And despite all the senior living options that have developed since the 1970s such as assisted living facilities, residents and supporters say the Pioneers' Home remains unique.

"It's family here," resident Dee Eckhart said. "And we come here to live, not to die."

Other residents hanging out in the spacious lobby one afternoon this week all used words similar to Eckhart, saying the Pioneers' Home feels like their home and other residents are like family.

Some people, including Vernon and Phyllis Thimsen, become family after moving in. Vernon asked Phyllis to marry him shortly after she arrived. Vernon also is a former Pioneers' Home employee.

"We were built with a different mission in mind," explained Jeanine Dike Brown, former Pioneers' Home superintendent who worked there about 25 years until 2005. "They come there with the intention of living there for the rest of their lives. No matter what kind of care they need, we can provide it."

That is key, Eckhart said.

Residents need to be able to walk in on their own, but then they can feel comfort in the fact that they can get all the higher levels of care in the future at the same place - and from people who already know them, Brown said.

"When they decline, they still have an identity," she said. "You love them. They're part of you. It's the most incredible place in the world to work."

Residents come and go when they please.

The Pioneers' Home also is unique in its appearance. The stately home, listed on the National Register of Historic Places, sits on top of a hill overlooking Prescott's courthouse plaza.

When the state sought architectural designs for it, officials rejected the first proposals because they weren't homey enough, noted Secretary of State Ken Bennett at the 100th anniversary celebration Tuesday.

"The most important four letters are the last four: home," said Bennett, whose grandmother Mildred lived there. "That's what the Arizona Pioneers' Home is intended to be."

It has numerous special touches such as a spacious lobby with a fireplace and rocking chairs, a huge covered porch overlooking the city, a waterfall pouring over a large granite outcropping and century-old pool tables direct from The Palace Saloon on Whiskey Row.

Considering people have to live in Arizona for 50 years to qualify to live in the Pioneers' Home, the residents all have a lot more in common than just their place of residence.

Mable Clarkson mentioned that she was born in Wickenburg and raised in Mayer, where her father worked at the old Bluebell Mine.

"My Dad did too!" exclaimed another resident, Betty Willcutt. She and her husband Tom much prefer the Pioneers' Home over a private nursing home.

"I used to think, 'I'm going to live in that place one of these days,'" Clarkson related. She's 91, and now her daughter is coming to live there too on March 1.

Five members of the Ritter family have lived there, including current resident Nora Ritter. Her family came to Yavapai County in 1867.

"The fact that many retired employees of the Arizona Pioneers' Home as well as some children of former residents come to live with us is testament to the quality of care our staff provides," Acting Supt. Ted Ihrman said.

Several members of the Tenney family, including the late Arizona Sen. Boyd Tenney, also have been residents of the home.

"That tells you they like the care," said Brown, who is Boyd Tenney's daughter.

Knowing that some legislators were balking at the Pioneers' Home costs during his tenure, Sen. Tenney sponsored legislation in 1972 that required Pioneers' Home residents to "pay what they could" to stay there. Previously, they stayed there for free.

Brown was the superintendent when the Pioneers' Home faced what might have been its biggest challenge.

All state agencies face sunset reviews every eight years (previously every decade), and in 1997 it was the Pioneers' Home's turn. The Auditor General's Office decided to conduct a detailed performance audit review.

"They came and camped out here for months at a time" over a two-year period, recalled Administrative Services Officer Dale Sams.

"At first it was really intimidating," Brown recalled. "Then it got ridiculous." The state spent all kinds of money on all kinds of inspectors, she said.

The Auditor General's Office concluded the Pioneers' Home needed $7.9 million worth of upgrades so it would meet Medicare rules, even though it didn't get federal money, so it didn't need to follow those rules, Brown recalled.

"The bottom line is, they feel the place is a waste of money, and they want to shut it down," Brown told The Daily Courier back in 1997 when the sunset review was taking place.

Brown decided to invite legislators to the Pioneers' Home to see its value for themselves. With the help of then-Rep. Sue Lynch, nearly 30 legislators showed up.

After a meeting at which residents and supporters were clear they wanted to keep the Pioneers' Home, legislators sat down at lunch with the residents.

"I think that was a real benefit to us," Brown said. "They became people to them."

Brown was determined to take care of any issue the sunset review cited. Somehow the Legislature appropriated money for a stair tower where residents could be protected from fire while they worked their way down the stairs.

In 2006, then-Rep. Laura Knaperek of Tempe sponsored successful legislation to make it harder than ever for people to qualify to live in the Pioneers' Home, thereby making it harder to fill the rooms. Residents had to be at least 70 years old and be residents of Arizona for at least 50 years. Miners remained exempt from the requirements, but only if they worked in the mines instead of office jobs.

When the home first opened in 1911, residents had to be at least 60 years old and residents of Arizona for at least 25 years. Later, the numbers were increased to 65 and 35.

Arizona Senate Majority Whip Steve Pierce of Prescott said he'd like to see the residency requirements loosened so the home can have more paying residents. He is a strong supporter of the home.

"I've gone up there with my parents to see people since I was 9," Pierce said. He remembers seeing lots of old miners smoking and chewing tobacco back then.

Pierce and House Majority Leader Andy Tobin of Paulden say the Pioneers' Home is safe as long as they are leaders in the Legislature.

"This thing is well supported down here," Tobin said. "It's as much a part of our heritage as anything else. This is something that's engrained in the beginnings of Arizona."

Still, not every legislator supports spending state money on the home. Rep. Jack Harper of Surprise, whose District 4 includes a good portion of Yavapai County, recently Tweeted that the home should be privatized because its budget was going up 156 percent next year.

His figure was incorrect; the governor's budget actually proposes a decrease. The Legislature hasn't put out any proposed figures yet.

Rumor has it that after the Legislature decided to take the territorial capitol away from Prescott for the second time, it granted Prescott the Pioneers' Home as compensation. When Tucson lost the capitol, it got the University of Arizona as compensation.

university, Tobin said. Any changes to the Pioneers' Home need to come from the home and the community, he added.

The home's current annual budget is $6.26 million, and the governor's budget proposes a slight drop next year

to $6.18 million. Dedicated funds that get money from state trust land leases have helped pay its costs since day one.

Residents combined contribute more than $900,000, but the Legislature puts that money into the state general fund, Ihrman said.

Eckhart said it makes a huge difference to her that she pays what she can afford.

"If it weren't for this place, I'd be out on the street - seriously," she said.

Residents and dignitaries celebrated the home's 100th anniversary Tuesday with a huge cake, music by the in-house Rhythm Band, a poem by Jody Drake as former Pioneers' Home resident Sharlot Hall and the premiere of a new DVD about the home's history.

"What a blessed place," one resident was heard saying as she watched the DVD.