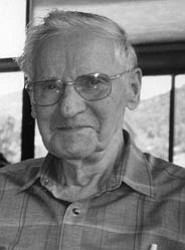 Dick served in the U.S. Army in WWII. He married Doris R. O'Hern May 22, 1948. While in Decatur, he was a member of St. James Catholic Church and the Knights of Columbus and was employed at Miller O'Neill. When he retired, he and his wife moved to Prescott in 1987 and were active at Sacred Heart Catholic Church.

Dick is survived by his son, Ronald (Nadine) Kapper of Grass Valley, Calif.; his daughter, Rosemary "Cookie" (Larry) Kane of Joliet, Ill.; step-grandson Brad (Janie) Kane; and step-great-grandsons Brandon and Cooper of Forsyth, Ill.; and sister Dorothy Volk of Washington, Ill. His wife, Doris, preceded him in death on Aug. 12, 2010.

A celebration Mass will be at 11 a.m. Saturday, Feb. 5, 2011, at Sacred Heart Catholic Church, Prescott, with private inurnment at Mountain View Cemetery, Prescott.

In lieu of flowers, memorial in Dick's name to Good Samaritan Society Prescott Home Health and Hospice, 1065 Ruth St., Prescott, AZ 86301, or charity of your choice.