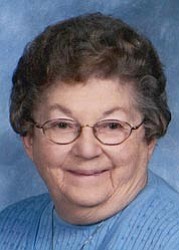 Florence Rose Kutz Thieleke, 89, of Chino Valley, Ariz., went to heaven on Dec. 22, 2011, following a lengthy illness. She passed away peacefully at home surrounded by her family.

In 1951, Florence opened and became the first teacher of St. John's Lutheran School in Covina, Calif. She earned her BA and later, in 1970, her MA from La Verne College. A lifelong teacher and school administrator, she retired from the Apple Valley School District in 1979. She also taught at Victor Valley, Yavapai and Prescott Colleges. After retiring, she was a volunteer leader and director of God's World Preschool and Childcare in Prescott Valley, Ariz.

Funeral services for Florence are scheduled for 10 a.m. Friday, Dec. 30, 2011, at Trinity Lutheran Church in Prescott Valley, with luncheon to follow. Internment will be at the Heritage Memorial Park in Dewey, Ariz. Memorial donations may be made in Florence's honor to God's World Preschool and Childcare or Friend's of Ruth, c/o Trinity Lutheran, 3950 North Valorie Drive, Prescott Valley, AZ 86314-8234.