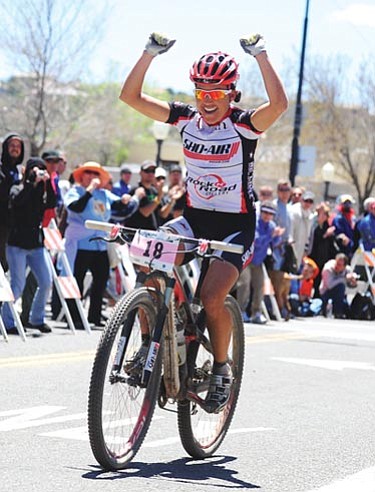 Originally Published: December 23, 2011 9:23 p.m.
Tweet
Editor's Note: The following story was published in The Daily Courier May 2, 2011.The 8th annual Whiskey Off-Road bicycle race returned to the Prescott National Forest in early May, offering one of the largest single-day cash purse prizes in the mountain biking industry.Whiskey Off-Road organizer Todd Sadow of Tucson expanded the event to three days in downtown Prescott while offering separate amateur and pro races to men and women riders for the first time. For significantly boosting the presence of mountain biking in the Prescott area, this year's Whiskey Off-Road race has earned the No. 8 spot on The Daily Courier's list of the Top 10 Sports Stories of 2011.PRESCOTT - With less than 10 miles to go, Pua Mata didn't think she had a chance to win the eighth annual 50-mile Pro Fat Tire Crit and Endurance XC Whiskey Off-Road race Sunday, May 1. But she never gave up."When I hit the road, they were like, 'she's just in front of you'," Mata said about chasing the leader, as she was coming down the home stretch. "When we were on the straightaway coming down here, I saw her with the police car, and I just put my head down and went by her."The woman she passed to win her share of the $20,000 prize purse was Catharine Pendrel, the No. 1 ranked women's cross-country rider in the world, according to Union Cyclist International."I was just thinking don't give up, because I know she's strong," Mata said. "It didn't feel real to me, because I really didn't expect to win. I though Catharine was gone."Competing in her first ever Whiskey 50, Mata shattered the previous women's course record, finishing in 3 hours, 30 minutes and 11.59 seconds."This course is awesome, because it has a little bit of everything," she said. "The altitude coming from sea level really played with me. For a moment I thought I was done."Pendrel finished second with a time of 3:31:16.84.Mata's victory was the icing on the cake of a great weekend spent in Prescott."The people of the town are so welcoming and you don't get that a lot," she said. "Everyone is really appreciative that we are here. It's nice to have the support of the town behind an event like this. That's what it's all about, sharing the love of bikes."Mata took home $4,000 for her efforts."That's one of the biggest cash purses in mountain biking, period," race promoter of Epic Rides Todd Sadow said. "Prescott is slowly being discovered as a gem of mountain biking."In the men's race, Chris Sheppard took home first place, as he also broke the previous course record.Sheppard, a native of British Columbia, Canada, finished the race in 3:05:06.84, which was more than 12 minutes faster than anyone who had competed before him."Five of us got away at the start," he said. "Peter (Glassford) and I rode conservatively on the downhill and were able to avoid any mechanical issues."Sheppard led most of the race, but pulled away just past the halfway mark."At about 30 miles in, that's when I started to gap them," he said.The hardest part of the race for Sheppard, wasn't a particular climb or descent."It was the start with Denny's in my stomach," he joked.Sheppard, who was riding in his first ever Whiskey 50, defeated second-place finisher Colin Cares, who had a time of 3:09:16.79."There are some great competitors here and that is going to bring out the best in everyone," Sheppard said. "I just gave it my all and tried my hardest."The 2011 race was the first time in the event's history that a separate pro race was held.The pro race, as well as the increase of competitors in the armature races, helped make this year's Whiskey Off-Road the most successful in its eight-year history."It's been great," Sadow said. "We definitely made an incremental jump in growth, going from 1,000 riders to 1,500. Our expo also grew significantly, from 12 vendors to almost 50."It also helped having one of, if not the biggest cash purse in the sport."That's very much unheard of in this industry," Sadow said. "Mountain bikers don't get big cash purses like that typically. As a result we pulled in almost every major pro in American and a half dozen from outside of America... We've really elevated the profile of the event on a world level."
Report a Typo Contact
Sign up for Courier e-News Alerts
Most Read
7 days
30 days