Spirit of the season: Musicians release Christmas CD to benefit Coalition for Compassion and Justice 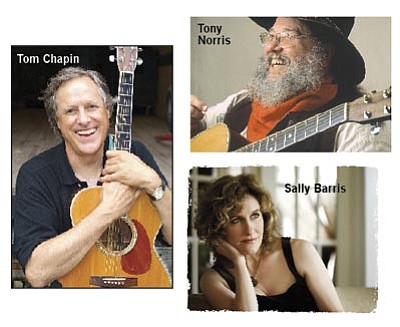 A collection of Christmas listening - from classical favorite melodies of the season to cowboy poems and humorous tales - comes in one package, "A Gift of Hope," that benefits the Coalition for Compassion and Justice.

The CD, compiled by Tom Agostino, director of the local Folk Sessions concerts, features 12 popular performers who have freely given of their music to support CCJ's efforts to help people in need.

When the idea for the CD popped into Agostino's head, he approached Grammy-award winning musician, entertainer, singer-song writer and storyteller Tom Chapin to see if he would allow his "The All-Purpose Carol" to be included on the recording.

He had met him through a Folk Sessions performance and calls him "a real humanitarian" and "a great guy." Agostino thought Chapin's song that celebrates all the different holidays would be a nice encompassing piece for "A Gift of Hope."

When Chapin learned of CCJ's mission, he told Agostino yes.

"This gave me the boldness" to contact the other artists who are on the CD, and the list blossomed to feature Sally Barris and Amy Speace, Chuck Pyle, Acoustic Eidolon, Dutch Holly, Gypsy Soul, Chris Isaacs, Doc Garvey's Remedy, Tom Tuerff, Sarah Crews, Layne Longfellow and Tony Norris.

Barris and Speace's "Home for Christmas" opens the recorded music fest and "sets the mood for the whole CD," Agostino said. Barris "totally agreed" to having her song a part of "A Gift of Hope." He said he listened over and over to the artists' contributions so that he could put them in an order that would "flow in a nice way."

Tres Ikner and Jen Juniper, a husband and wife duo who perform as Dutch Holly, contributed "Coming Home for Christmas," which Ikner wrote especially for the CD.

Both Ikner and Juniper sing and write songs together and perform their indie pop genre at venues in the Prescott area and Flagstaff. He plays guitar, bass, and keyboard, while her special talents are acoustic guitar and piano. During an interview on Agostino's Folk Sessions radio show, Ikner accepted the offer to submit a song for "A Gift of Hope."

"I sat down at the piano," Ikner said, and with a flood of memories from his boyhood in a big family, "the lyrics poured right out on the pages," he said. After some tweaking that Juniper suggested, he recorded "Coming Home for Christmas."

A year in England was the inspiration for Crews' composition, "Winter Love Song," a Christmas present for her husband, Tim.

Sarah is a music caregiver for hospice patients, and Tim is a professor at Prescott College. She describes her recording as a love song, a tribute to a "cozy, lovely time with family," in a recording that combines their voices, with Sarah on guitar and Tim on the mandolin.

Joe Scott and Hannah Alkire are Acoustic Eidolon, and, together, they add their instrumental brilliance in their rendition of "Hark! The Herald Angels Sing." She plays the cello and he an unusual instrument, a custom double-neck guitar with 14 strings.

"The Gift of Hope" sells for $10 to $15, depending on the selling entity, and is available online at www.yavapaiccj.org or at the CCJ Thrift Shop, Jenny Longhorn's and the Black Arrow.

CCJ provides an array of services to impoverished people in the greater Prescott area. The songs and artwork for the CD's cover were donated, and 93 percent of the proceeds will go to CCJ to support its services, Agostino said.

"I am very honored to be a part of this project," Crews said. "It's fantastic what CCJ does to help folks in our community who need help."

Even though Scott and Alkire live in Colorado, they "found it to be an honor to be in the compilation" of "A Gift of Hope," Scott said. "We have causes we believe in" and frequently do benefits to help others.

"It's important to give anytime that our music can be more than just to listened to. If there is potential to help people, that is as good as it gets."