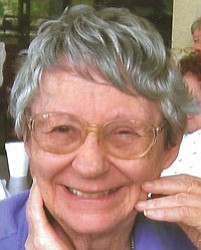 She attended school in Montana and Castilleja School in Palo Alto, Calif., and graduated from Gulf Park College, Gulf Park, Miss. Polly also attended the University of California at Berkeley where she was a member of the Delta Gamma sorority. She was an outstanding swimmer and was Montana State Champion for three consecutive years in the 50-yard backstroke and the 100-yard freestyle.

Polly was adopted into the Blackfoot Indian Tribe, Browning, Mont., in 1925 by Chief Fred Big Top at the age of 6 months. She was given the name of Segugatictum, which means Shining Glacier.

She is preceded in death by her late husband, Harvey Black Apperson Jr. (Ret. USAF). They were married on March 25, 1946, and lived in many states and countries including Greenland and England while in the USAF. They traveled extensively throughout the world after "App" retired. They were married 54 years.

She is survived by her two children, Diana "Dicy" Apperson and partner Ski of Prescott and Harvey B. (Annette) Apperson III of Littleton, Colo.; three grandchildren, Kirsten W. (Toby) Ayars of Santa Barbara, Calif., Candice A. (Dan) Hughes of Lakewood, Colo., and Heather A. (John) Brennen of San Francisco, Calif.; and one great-granddaughter, Hannah Hughes.

The family would like to thank Granite Gate Senior Living and Good Samaritan Society Prescott Hospice for their kindness and support.

Services will take place in Great Falls, Mont., during the summer of 2012. In lieu of flowers, consider a donation to your local animal shelter in Polly's name.