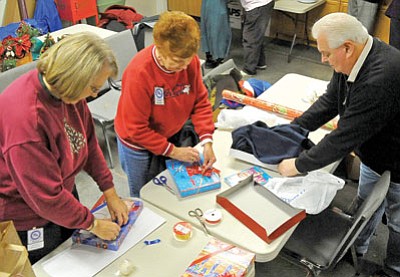 Details such as the color of clothing or the type of reading materials can get lost in the convalescent atmosphere.

That is why the gift-giving efforts by the Prescott Antique Auto Club are so meaningful to the veterans, said Paula Moran, supervisor for recreation therapy at the VA.

"It's a choice for them, and they lose a lot of personal choices," Moran said, noting that the Antique Auto Club allows each veteran to choose the gift they will get for Christmas. "That's very special and unique."

She compared the gift giving to "when you were a kid and told your family what you wanted, and then it was there."

For more than a decade, members of the Prescott Antique Auto Club have been coordinating the gifts for the veterans in the VA's Community Living Center.

Susan and Bill Dumont, ranchers in the Kirkland Junction area, have set aside a part of their Christmas Day for about 12 years to help deliver the gifts to the veterans.

"It's always amazing; there are always a couple of tear-jerking moments," Susan Dumont said, noting that the auto club's gifts are sometimes the only presents that the veterans receive.

With a son of her own in the military, Susan said she feels a bond with the veterans, and her son likes to hear of her participation in the program as well. "He asks if we're still visiting the veterans," she said.

Bill Dumont notes that the car club members fan out through the Community Living Center and spend time with each resident as they deliver the gifts.

"We just talk about anything," he said. "It's easy to spend 10 or 15 minutes with a vet. It's always fulfilling; it really encompasses the spirit of Christmas."

David Llewellyn, the auto club's chairman for the program, estimated that the club would deliver about 75 gifts to veterans this year. This past Tuesday morning, several dozen members conducted a wrapping party to prepare for the Christmas Day delivery.

The group made short work of decorating the boxes containing hooded sweatshirts, games, slippers, books and shoes that the veterans requested.

Each year, the club distributes a letter in advance, asking the veterans to choose from a list of gifts. The letter also asks for size and color preferences.

"It is as individualized as it can possibly be," said Moran, who works with the auto club on distributing the letters.

Club President Charles Rulofson noted that the group makes it a point each year to deliver the gifts on Christmas Day. This year, he said Prescott Mayor Marlin Kuykendall would join the group in handing out the gifts.

The Christmas delivery is another aspect that Moran said makes the auto club's program special to the veterans.

"The biggest thing is that people take time on Christmas Day to go around and sit with the veterans," she said.

While about half of the veterans have family living nearby, Moran said some would otherwise have no visitors on Christmas.

The Prescott Antique Auto Club raises the money for the gifts through its annual car show at Watson Lake. This year's gift-giving effort will cost a total of about $2,000.