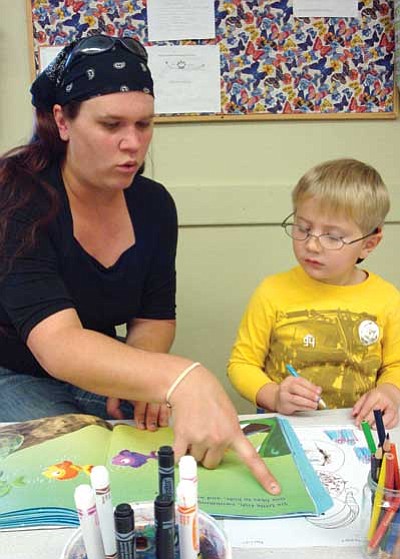 Parents Kira Turner and Robert Butler know reading is important to learning, so they set aside time each night to read to their son, Dominic Butler, 4.

"Our son has always had books," says Kira. "We read him the books that we've had since we were kids."

The preschool Dominic attends, Discovery Gardens Preschool in Prescott, also takes part in a new Yavapai College program called Raising a Reader, which sends books home with students each week for parents to read to them, then return next week for new books.

In April 2010, the Arizona State Legislature passed HB 2732, also known as "Move on When Reading," an unfunded mandate that requires third-graders to read at their grade level in order to move on to fourth grade, said Yavapai County School Superintendent Tim Carter. Children in first grade this year are the first group of children who will need to meet this standard, he said.

Recent studies show 44 percent of fourth-graders in Arizona do not read at grade level, and that percentage drops to 21 percent in Yavapai County, Carter said.

Carter supports the move to identify students not performing at grade level to give them the remediation and intervention they need, he said, but is concerned about the lack of funding.

"Unfortunately, the Arizona Legislature was not able to fund this statute," Carter said. "As an unfunded mandate, the burden for creating these interventions falls squarely on the local districts and charters."

To help limit the need for remedial education later on, parents and caregivers of preschool-age children are encouraged to read to them early and often, Louge said.

Recognizing this, the Yavapai Regional Partnership Council of First Things First recently awarded a grant to Yavapai College to pay for Raising a Reader, an early literacy program that partners with preschools, childcare centers, and home-based childcare to encourage families to read to children, Louge said.

Children in the Raising a Reader program bring home several books each week and exchange them for new ones the next week, said Judy Ely, a teacher at Discovery Gardens Preschool.

"Everybody has a lot of positive things to say about the program," Ely said.

Since the school enrolled in Raising a Reader in October, students' enthusiasm for books has grown, Ely said.

To learn more about First Things First, please visit www.azftf.gov. For more information on Raising a Reader, please call Carolyn Shelley at 928-776-2245 or email her at Carolyn.shelley@yc.edu.