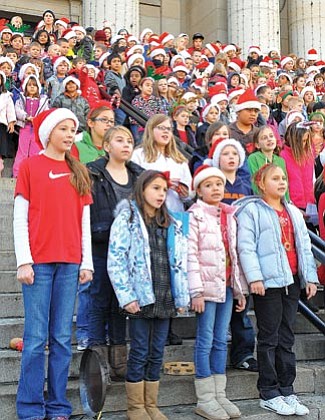 As their sister Haylie, 8, sang Christmas carols along with other Lincoln Elementary School students on the north steps of the Yavapai County Courthouse in Prescott on Thursday afternoon, Austin, 5, and Emma 4, held hands and danced to the music.

Their mother said her daughter was excited to perform today.

That anticipation was shared by many.

"She's been playing it a little close to the vest and saving up all her energy for today," said Paul Mountcastle about his daughter Madeline, a first-grader who was singing on the steps.

Cassandra Cruz hugged her young daughter Claudette to her shoulder as she watched her children Colbe, a third-grader, and Nevaeh, a first-grader, take part in the longtime Lincoln tradition as the children's grandmother and great-grandmother stood nearby enjoying the show.

Music teacher Judy Clothier led the students - who were wearing Santa hats, bows, and antler headbands - in singing "Jingle Bells," "Over the River," "We Wish You a Merry Christmas," and a number of contemporary holiday songs.

The audience of family members, people on break from nearby businesses, courthouse staff and other community members stretched back to the Rough Rider statue on the courthouse plaza and cheered and applauded after each song.

"The students have been practicing for this concert since mid-October," said Clothier, who also teaches voice as Yavapai College. "A few pieces I thought might be difficult for the younger students, but they were very excited and learned all the songs."

"Lincoln is a family-friendly school rich in traditions," said Principal Teresa Bruso. "Our annual courthouse caroling is one of the many activities that exemplifies how our school incorporates the community into the school on a regular basis."

"Isn't this amazing," said Gina Staltari who was there to see her daughter Sarah, a first-grader, and her son Steven, a third-grader, sing. "You just don't see this anywhere else."