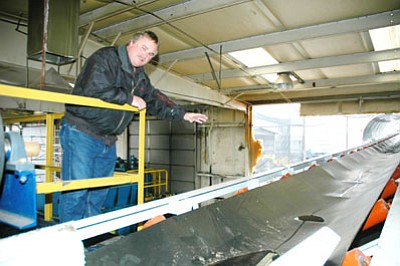 Patriot Disposal co-owner Chris Kuknyo points out the final conveyor for waste after recyclable materials from every garbage truckload coming into the business are removed at Patriot’s new recycling center on Valley Road in Prescott Valley.<br> TribPhoto/Cheryl Hartz

In 2000, Chris Kuknyo and Jay Eby founded their own waste business in Prescott Valley.

Nearly 12 years later, Patriot Disposal continues to be a local leader in customer service and innovation. Now, Patriot will take another leap as it moves 100 percent of its customers to recycling by doing the dirty work for them.

In January, Patriot will begin separating all of the waste its trucks pick up, baling and selling the recyclables and sending the rest to the landfill.

Customers will no longer have to place recyclables in separate cans, saving the charge for a recycle container, and the company will send much less waste to landfills.

Patriot began its curbside recycling service in 2005, and charged a small monthly fee. The company provided recycle cans and picked them up with a separate truck. Despite the program being the largest in the area, Kuknyo said, Patriot was getting only 20-25 percent participation.

A year ago, Kukyno said, he was at the company's transfer station in Prescott Valley, when he had a "light bulb moment."

"I was watching trucks dump all these materials. One truck was filled with almost entirely cardboard. I thought, 'Why not gather these materials and sell them as a commodity?'" he said.

Kuknyo began to look at recovery facilities, and decided to build his own in Prescott Valley.

"It's the only one of its kind in Arizona, though it has been done in other states. We'll send one truck, then sort through the entire stream of waste, using both people and machinery," he said.

Kukyno said one woman expressed concern about privacy, since people will be going through the trash. But things move far too quickly for employees to be able to look at individual pieces of waste, he said.

"I think people don't realize the volume of waste we have. We take in 160-200 tons a day, and the belts move 100 feet each minute," he said. "It's personal service, but an impersonal process."

Running the new facility will be Scott Kivett, a longtime patriot employee who set up a recycling operation in Durango, Colo.

"He was driving for us for eight or nine years," Kuknyo said. "I always said he was the company's least used resource."

It's hard to find a down side to the new operation. Along with making trash disposal easier and saving money for its customers, Patriot is gaining 100 percent participation in recycling and sending substantially less material to landfills. Additionally, Patriot will separate and recycle all of the waste from other local haulers who use the transfer station. And there is more good news.

"We are investing half a million dollars and creating 24 new jobs in one of the roughest economies we've ever seen in our lifetime," Kuknyo said.

To thank customers who have participated in patriot's recycling program, the company will offer people the option of keeping their recycling cans to use as a second garbage receptacle at the same charge.

Customers are happy with the change, Kuknyo said.

"Most are ecstatic that they are saving money, we are expanding, and Prescott Valley will be a much greener place. It's another example of the private sector and small business thinking outside of the box. We're betting on it with our own sweat and money."

Kukyno said the Town of Prescott Valley has been very supportive of the new operation.

"The Town of PV Building Dept. has been great to work with. When we came to them with this idea that has never been done here, they watched us closely, but they are not afraid to explore new ways of doing things. I've been in shock at how helpful the town is," he said.

Beginning in January, Patriot invites the public to tour the new recycle operation. For more information on the operation, or on Patriot services, call 928-775-9000, or visit the website at www.patriotdisposal.com.