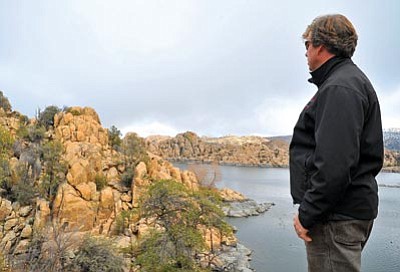 Matt Hinshaw/The Daily Courier<br>Chris Hosking, the City of Prescott’s trails specialist, looks out over a piece of land at Watson Lake that would complete a trail circling the whole lake Wednesday afternoon in Prescott.

PRESCOTT - A half-mile section of new trail would achieve a long-awaited recreational goal for the city: completion of a loop around Watson Lake.

But Prescott City Council members worried this week that it also would increase the city's legal liability on the adjacent granite cliffs, which are attractive to rock-climbers.

The council opted to take no action Tuesday on a license agreement that would provide public access to a privately owned parcel of land northwest of Watson Lake, near the site of the old boat ramp.

While a trail is already in place around much of the lake, a 0.6-mile gap exists through the private property. That section would complete the approximately 5-mile loop around the lake.

Prescott Parks and Recreation Director Joe Baynes told the council that the trail would help to "highlight one of the jewels of the City of Prescott."

The planned section would traverse massive granite formations and would offer views of Watson Lake.

Along with allowing access for hikers, the new trail segment also would open up an area that has been popular with rock climbers.

It was with that aspect that council members voiced the most concern this week.

"What I have a real problem with is the licensing agreement," Councilman John Hanna said. "Who's the liability going to fall on?"

He added: "I have a real problem with the words 'climbing access.'"

When Hanna asked whether the city would be protected from lawsuits under the recreational immunity, Kidd responded, "I think we'll be protected as well as we can be protected."

Still, several council members said they were leaning toward voting against the license agreement if the vote had occurred this week.

While Charlie Arnold said he would like to see the license agreement happen, he suggested that the city should look more into the risk. "Do we have a risk mitigation process in place?" he asked.

Councilman Jim Lamerson said the climbing area could be viewed as an "attractive nuisance," and he also pushed for more review. "There needs to be some homework done," Lamerson said.

Hanna suggested pulling the item off the agenda until the council gets answers to some of its questions. "I too want to see this happen," Hanna said. "But if we vote now, I'm afraid I'm going to have to vote 'No.' "

On Wednesday, Baynes said he plans to compile more information for the council about the city's signage and patrols of its trails.

"I am going to do a more detailed risk management plan," Baynes said.

He estimated that the item could be back on a council agenda by January.

Baynes noted that the parks and recreation department proposed the license agreement as a way of providing trail connectivity in the area.

The license agreement pertains to a parcel of land owned by Charles and Margaret Horsley. The trail would connect with the city's Flume Trail along Granite Creek.