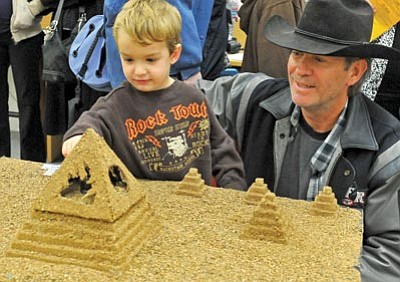 As his family and other students looked on, D'Artagnon Woodruff in full costume launched into his hip-hop take on the Nile River at Prescott Mile High Middle School's Ancient Civilization Night this past Wednesday.

"Let's go pharaoh style, down the Nile, watching the crocodiles float by single-file, 'cause this is the only water source for millions of miles," Woodruff rapped.

Just inside the entrance to the school, students made presentations as if they were various Greek gods and goddesses.

"Do you think I like having that many people in my kingdom? It's always a traffic jam," said Thea Cline, who portrayed Hades, ruler of the underworld. "There are two things that get to me - heroes and restless souls. Heroes finding ways to avoid death for years, and restless souls are always trying to get out through portals or by making a deal with a human.

"Let's get this straight right now," Cline continued as the Greek god of the dead. "I didn't kidnap Persephone. She jumped into my chariot, and my brother Zeus said I could take her as my wife."

The students' presentations and performances were a celebration of what they learned about Greek, Roman, and Egyptian cultures, said Cassie Habeck, sixth-grade social studies teacher at PMHMS.

Habeck said they originally held the event in the classrooms, but soon realized they needed more space for all the family members who attended.

"I commend the students for their hard work on their projects and the sixth-grade teachers for their collaboration and dedication to studying ancient civilizations across all disciplines" Principal Jim Wells said. "These in-depth projects actively engaged students and were aligned to state standards."

Language arts teachers helped the students with their plays, and math and science teachers included Greek, Roman and Egyptian discoveries in their lessons as well, Habeck said.

Walking around the library, parents and siblings looked at projects about makeup and hygiene in ancient Egypt, how the pyramids were built, and a working model of a shadouf used to bring buckets of water up from the Nile.

Hannah Barbe and Chloe Cornell held up a poster and spoke about the discovery of King Tutankhamun's tomb.

"Howard Carter was 17 when he started working in Egypt, and he was 48 when he found King Tut's Tomb," Barbe said.

"Scientists for years thought King Tut died from murder, but a recent study found he died from complications from a leg injury, malaria and a bone disease," Cornell said.

Kathryn Cline, a parent, said the students' knowledge and excitement was clear in their work.

"It's just amazing what they were able to do," Cline said.