Fast and flurrious: Storm clears out after dumping more than 2 feet of snow 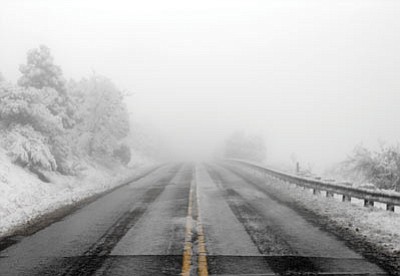 Scott Orr/The Daily Courier<br>Senator Highway was a road to the clouds Tuesday morning, with low visibility as the clouds descended and the snow fell.

The latest winter storm is supposed to clear out of Prescott Wednesday, with only a 20 percent chance of precipitation remaining.

The storm brought more than two feet of snow to parts of northern Arizona by Tuesday morning before a break in the weather. More snow fell Tuesday night.

High temperatures should remain in the 40s with lows in the 20s for the rest of this week, with a slight chance of showers again by Friday.

Prescott got 1-2 inches of snow by nightfall Tuesday.

Roads were snowy in Prescott Monday night, but just wet by the time most people went to work Tuesday morning. Schools in the Prescott region were open Tuesday, although they closed in other parts of northern Arizona including Flagstaff.

While snow wasn't a problem for most of Prescott through late Tuesday afternoon, some vehicles became stuck on muddy rural dirt roads in the Prescott region. And higher-elevation areas on the southern and western edges of Prescott got much more snow than Prescott proper. Snowfall reports to the National Weather Service by 11 a.m. Tuesday included 10 inches of snow seven miles southeast of Prescott, and 6 inches five miles west of Prescott.

The area around Highway 89 about eight miles south of Ash Fork reported 5 inches of snow.

Forest Lakes reported the most snow by 11 a.m. Tuesday with 24 inches. Other snowfall reports to the National Weather Service by that time included 13 inches in Flagstaff, 12 inches in Alpine, 12 inches in Strawberry and Pine, 7 inches in Williams and 4 inches in Payson.

Snow was accumulating as low as 5,000 feet in elevation.

State officials temporarily closed a section of Highway 260 east of Payson Tuesday morning because of snow.

Highway 89 south of Prescott, northern Interstate 17, and higher-elevation parts of Interstate 40 were covered in snow and ice.