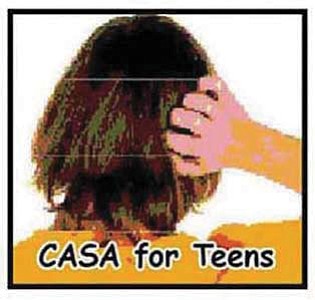 A CASA (Court Appointed Special Advocate) volunteer is needed for 16-year-old "Haley." Child Protective Services (CPS) removed this teen from her mother's care after they were both evicted from the hotel room where they were living. The father abandoned the family several years ago, and his whereabouts are unknown. Haley's mother has a methamphetamine addiction and provides this drug to her daughter, who also abuses marijuana. The child, Haley, has two children of her own who were previously removed by CPS due to her substance abuse.

Among the CASA volunteer's responsibilities: monitoring Haley's ongoing progress in her foster home; working with her schoolteachers, to help promote her education; working with her therapist and substance abuse counselor, to keep abreast of her mental health and drug use issues; working with Haley to comply with CPS-mandated treatment programs that might permit her to resume caring for her children; assisting CPS in working with the mother, to determine whether she would be willing to participate in substance abuse treatment programs so she could resume responsibility for her daughter; working with CPS to determine whether other relatives might be available to support the mother's efforts to be reunited with Haley and/or to become guardians for her; attending monthly meetings with the teen, her mother and other team members involved in the case; and making recommendations to the judge as to the best long-term placement for Haley. CASA volunteers need to provide information to the court at report and review hearings throughout the life of a case.

At the present time, there is a great need for CASA volunteers willing to work with teens. If youths, such as Haley, who is already 16, reach the age of 18 without being reunited with their parents or finding another permanent home, they will "age out" of the system and may lack supports within the community. CASA volunteers can be very helpful to these teens, in providing positive role models and advice for planning their futures.

EDITOR'S NOTE: This child's name has been changed to protect the identities of those involved and this child is not available for adoption at this time.