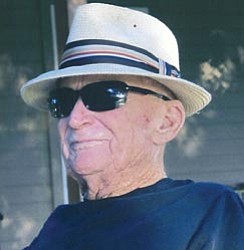 Ken was an Army veteran and served in Japan. He moved to Prescott with his wife Maxine and children in 1961. He worked for El Paso Natural for 19 years before moving to Prescott. He owned and operated a Richfield gas station. He then worked as a mobile salesman for Bowes for six years. He owned and operated Village Cleaners along with his wife. He retired from the cleaners and pursued racehorse training at the age of 55.

In later years, he moved back and forth between Duncan, Ariz., and Prescott until Maxine's illness required more care, and then they moved to Chino Valley with their youngest daughter, Connie Hickman, and her husband, Perry.

His wife Maxine preceded him in death. He is survived by his children R. Kay Richardson of North Carolina, Judy (Don) Lough of Phoenix, Ariz., Rick Gilliland of Prescott and Connie (Perry) Hickman of Chino Valley; one brother John (Eunice) Gilliland; two brothers-in-law, Bill Stephens of Central Arizona and Thomas Elms of Duncan; nine grandchildren; 17 great-grandchildren; and many nieces and nephews.

A memorial in his honor will be at his daughter's home in Phoenix on Jan. 7, 2012, at noon. Please contact Arizona Ruffner Wakelin Funeral Home at 928-445-2221 or Connie Hickman for directions. In lieu of flowers, please make donations to Prescott VA Hospice or hospice of your choice.