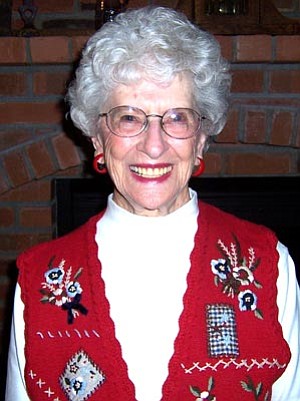 She graduated from Florida State College for Women in 1945 and married Howard Gene Gaskins of Clarksburg, W.Va., in the same year. During their 54-year marriage, they lived in Florida, West Virginia, Georgia, South Dakota, Wisconsin, Illinois, Iowa, Nebraska and California. Maise was a homemaker, mother of three children, and was a teacher and secretary in several states. Her husband died in 1999 and in 2002 she moved to Prescott, Ariz., to be near her daughter and lived at Las Fuentes Resort Village. She was a believer in Jesus Christ and was active in many Baptist churches in her life, including First Baptist of Prescott.

She is survived by her children, Kenneth D. Gaskins of Cave Creek, Ariz., Jeffrey D. Gaskins of Lincoln, Neb., and her daughter and son-in-law, Judy L. and James A. Hughes of Prescott; sisters Ellinor Reichert of Monticello, Fla., and Wilma Curtis of Ft. Meyers, Fla.; four grandsons and one great-granddaughter.

In lieu of flowers, donations may be made to the Faith Promise Missions Fund of the First Baptist Church of Prescott. Please visit and sign Maise's guestbook at www.ruffnerwakelin.com.