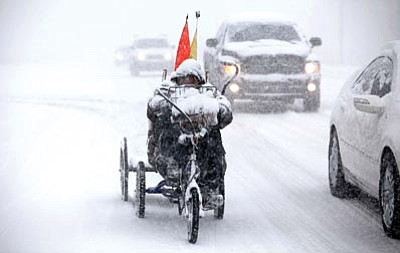 Jake Bacon/The Associated Press<br /><br /><!-- 1upcrlf2 -->Steve Kugler pedals his tricylce along West Route 66 as heavy snow falls in Flagstaff on Thursday. More than a foot of snow is forecast to fall in Northern Arizona.

Local police and fire agencies reported no major weather-related incidents or collisions by Thursday afternoon as a winter storm was just starting to settle in, but roads across some parts of northern Arizona were becoming dangerous.

The only reported weather-related problem in the Prescott area was a power failure from a lightning strike Thursday morning. Lightning took out power at 9:30 a.m. at part of Bradshaw Mountain Middle School in Prescott Valley, Central Yavapai Fire District spokesman Charlie Cook said.

"Lightning hit the light pole on the ball field, (and) traveled down to fry the electrical panel box on the ball field," Cook said. "It also hit the panel that provides electricity to the school, setting off the fire alarm."

Students were evacuated from school buildings for about five minutes as firefighters made sure the gym was safe. Students and staff then went inside the gym as firefighters cleared the other buildings, Cook said.

Meanwhile, traveling was getting treacherous in some parts of northern Arizona by Thursday afternoon.

The Arizona Department of Transportation reported snow and ice on Highway 89 between Prescott and Kirkland, where the road is steep and winding.

Snow and ice were covering the northern 40 miles of Interstate 17 from Highway 179 in Yavapai County north to Interstate 40 in Flagstaff.

A southbound vehicle slid off Interstate 17 about four miles south of Interstate 40 by mid-afternoon Thursday, and two crashes occurred on I-40 between three and four miles west of Flagstaff.

The Flagstaff area had 5 inches of snow, while Parks reported 4 inches and Williams got 2.5 inches by the time the Weather Service posted the numbers at 3 p.m. Thursday.

A second, colder storm will move quickly through northern Arizona on Saturday and Sunday, the National Weather Service said Thursday. Snow levels could drop as low as 4,000 feet. The strongest chance for snow in Prescott with this system is during the day on Saturday. It should produce less snow than the Thursday-Friday system.

High temperatures will remain 10 to 15 degrees below normal through Monday, the Weather Service said.