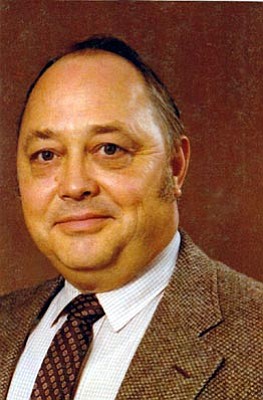 Gerald E. Johnson (Jerry) of Prescott, Ariz., passed away on Sunday, Aug. 14, 2011. Gerald was born in July of 1933 in Wenatchee, Wash. He was the eldest son to Edwin and Ruth Johnson, who had been transplants from Eau Claire, Wis., during the Great Depression. When he was six years old, the family moved back to Eau Claire, where Jerry and his two brothers, Richard and Ramon, and his parents lived in a rural setting with the Johnson family grandparents on the outskirts of town.

Gerald graduated from Eau Claire High School in 1949, and proceeded on to college in Madison at the University of Wisconsin. During this time, he also married his lifelong wife and companion, Jean O'Mara Johnson. Gerald received his medical degree from the University of Wisconsin Medical School in Madison in 1956. Jerry and Jean became the parents of three of their four children while still in Wisconsin, and a fourth was born when they moved to the west-coast state of Oregon in 1956, where Gerald practiced general medicine in the Portland area for approximately 15 years.

Later, Jerry again pursued his medical education, this time attending the University of Oregon Medical School in Portland, Ore., where he became a diagnostic radiologist in 1972. He practiced, in this capacity, in Klamath Falls, Ore., until his eventual retirement. His clarity and wisdom in the medical fields he served will be remembered by all who knew him.

To those who knew Jerry, he will always be remembered for his love of woodworking and the many hours he spent in his cozy woodshops, which were always an important addition to all of the homes he and his wife Jean built and enjoyed over the years. He did much of the designs and work on each of these homes himself. He had a broad knowledge of many things, written or otherwise, including the practical, and could fix anything. Gerald spent many hours with his family and friends on the Oregon Coast, even building a beach house as one of his projects. During his active years, he loved boating, fishing and camping. Gerald and his wife, Jean, enjoyed many friends and acquaintances over the years together, and have fond memories of travel trips taken with these friends, as well as with family members.

Gerald will be missed by his wife, Jean, of 59-plus years; his four children: two daughters, Elisa Johnson and Carla Lawson (Steve), and two sons, Mark (Deanna) and Daniel (Sue); and six grandchildren, Emily, Garrett, Christopher, Clayton, Brenna and Brianna. He was very proud of ALL of them and they will all miss him. He is also survived by his two brothers, Richard (Joan) and Ramon (Linda) and their families.

In lieu of flowers, the family suggests donations to the Hospice at Providence Portland Medical Foundation, 4805 N.E. Glisan St., Portland, OR 97213.