Presiding judge to decide if DeMocker trial gets a new judge 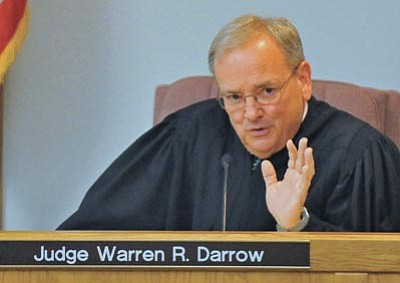 PRESCOTT - A new judge could be appointed to hear the retrial of Steven DeMocker on a murder charge and that trial might be delayed from an early September start date, said Yavapai Superior Court Presiding Judge David L. Mackey on Friday.

Mackey held a hearing to get input from both the defense and prosecution on his proposal that he reassign Judge Warren Darrow, who has been presiding over the DeMocker proceedings running up to DeMocker's retrial.

DeMocker, whose first trial ended abruptly when his defense team quit, is accused in the murder of his ex-wife, Carol Kennedy. While he normally appears in court in Camp Verde dressed in a jacket and tie, deputies led him into Mackey's Prescott courtroom in his orange prison jumpsuit and shackles.

In explaining why he felt it might be appropriate to reassign Darrow, Mackey was very careful to say that Darrow did not have a specific health problem, but stated, "It's about being realistic about what one person should have to do in one year's time."

Darrow has been presiding over the James Arthur Ray sweat lodge trial, which lasted months and for which new motions are still being filed.

Mackey noted that they are a very limited number of Yavapai County judges who are available to hear the trial: Darrow, Mackey, himself, and Michael Bluff, a civil-court judge who is moving to the criminal division.

DeMocker's defense team was opposed to changing judges at all. They produced a letter from DeMocker's daughter, Katie, who said she didn't want to see a judge change and preferred the trial go forward as quickly as possible. Also against changing judges, attorney Craig Williams said, is victim Carol Kennedy's mother, Ruth.

DeMocker's other daughter, Charlotte, was in court Friday and said she had "no stance on a reassignment." John Kennedy, the victim's brother, also has no objection, according to the prosecution.

Mackey did not make a decision Friday morning but, after a sidebar with the attorneys, did say that "the defendant objects to reassignment, but would stipulate to this court (Mackey) hearing the case" and an associated motion hearing, if he finds it necessary to reassign Darrow.

As a part of that discussion, the defense brought up a motion filed earlier in the week asking for more time because, Williams said, the prosecution had swamped them with disclosure and they couldn't be ready for trial by Sept. 7.

Deputy County Attorney Jeff Paupore said that they, too, had been given a good deal of disclosure fairly late but that the prosecution was willing to go to trial and work on researching the evidence at the same time.

Mackey pointed out that the jury pool was already being assembled for a September trial.

"We just can't do that," Williams said. He said they didn't have the "army of staff" the County Attorney's Office has.

Mackey nodded and said, "We all got the message that the Sept. 7 trial date is not realistic," but did not suggest a new start date.