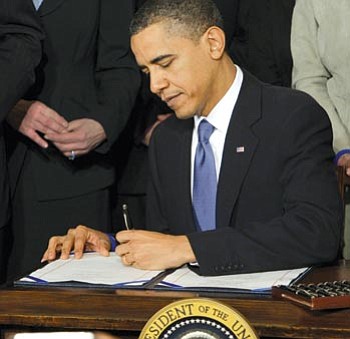 The divided three-judge panel of the 11th Circuit Court of Appeals struck down the so-called individual mandate, which is considered the centerpiece of the law, siding with 26 states that had sued to block the law. But the panel didn't go as far as a lower court that had invalidated the entire overhaul as unconstitutional.

Government attorneys can - and likely will - ask the full 11th Circuit to review the panel's ruling. They also can appeal to the U.S. Supreme Court, which many legal observers expect to have the final say on the issue.

White House adviser Stephanie Cutter said the administration strongly disagreed with the ruling and was confident it would not stand.

"Individuals who choose to go without health insurance are making an economic decision that affects all of us - when people without insurance obtain health care they cannot pay for, those with insurance and taxpayers are often left to pick up the tab," Cutter said.

The states and other critics argued the law violates people's rights, while the Justice Department countered that the legislative branch was exercising a "quintessential" power.

"What Congress cannot do under the Commerce Clause is mandate that individuals enter into contracts with private insurance companies for the purchase of an expensive product from the time they are born until the time they die," the opinion said.

Circuit Judge Stanley Marcus said in a lengthy dissent that the majority ignored the "undeniable fact that Congress' commerce power has grown exponentially over the past two centuries, and is now generally accepted as having afforded Congress the authority to create rules regulating large areas of our national economy."

The 11th Circuit isn't the first appeals court to weigh in on the issue. The federal appeals court in Cincinnati upheld the government's new requirement that most Americans buy health insurance, and an appeals court in Richmond has heard similar legal constitutional challenges to the law.

But the Atlanta-based court is considered by many observers to be the most pivotal legal battleground yet because it reviewed a sweeping ruling by a Florida judge.

U.S. District Judge Roger Vinson's ruling not only struck down a requirement that nearly all Americans carry health insurance, but he also threw out other provisions ranging from Medicare discounts for some seniors to a change that allows adult children up to age 26 to remain on their parents' coverage.

The states urged the 11th Circuit to uphold Vinson's ruling, saying in a court filing that letting the law stand would set a troubling precedent that "would imperil individual liberty, render Congress's other enumerated powers superfluous, and allow Congress to usurp the general police power reserved to the states."

On Friday, the National Federation of Independent Business, which joined the 26 states in the challenge, urged the U.S. Supreme Court to strike down the rest of the health care overhaul. The federation has argued the federal health care law would cost small businesses millions by forcing them to provide health insurance for employees.

"Small-business owners across the country have been vindicated by the 11th Circuit's ruling that the individual mandate in the healthcare law is unconstitutional," the group said. "The court reaffirmed what small businesses already knew - there are limits to Congress' power. And the individual mandate, which compels every American to buy health insurance or pay a fine, is a bridge too far."

The Justice Department countered that Congress had the power to require most people to buy health insurance or face tax penalties because Congress has the authority to regulate interstate business. It said the legislative branch was exercising its "quintessential" rights when it adopted the new law.

During oral arguments in June, the three-judge panel repeatedly raised questions about the overhaul and expressed unease with the insurance requirement. Each of the three worried aloud if upholding the landmark law could open the door to Congress adopting other sweeping economic mandates.

The arguments unfolded in what's considered one of the nation's most conservative appeals courts. But the randomly selected panel represents different judicial perspectives. None of the three is considered either a stalwart conservative or an unfaltering liberal.

Dubina, an appointee of President George H.W. Bush, is not considered to be as reflexively conservative as some of his colleagues. But he's been under particular scrutiny because of his daughter's outspoken opposition to the health care overhaul. U.S. Rep. Martha Dubina Roby, a Montgomery, Ala., Republican elected in November, voted to repeal the health care law.

Marcus and Hull were both tapped by President Bill Clinton to join the court. Marcus also was previously appointed by Republican President Ronald Reagan to serve on the Florida bench after several years as Miami's lead federal prosecutor. And Hull, a former county judge in Atlanta, is known for subjecting both sides of the counsel table to challenging questions.

Meanwhile Friday, an Ohio Supreme Court ruling appeared to clear the way for voters in that state to have a chance to reject parts of the health care law on Nov. 8. The Ohio high court in a unanimous decision rejected a liberal policy group's lawsuit challenging certification of the so-called Health Care Freedom Amendment. The lawsuit had claimed petitions carrying 69,000 signatures were flawed.