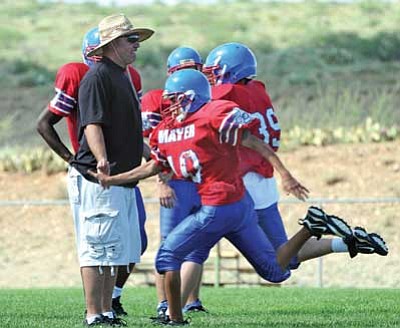 Photo courtesy Brett Soldwedel<br /><br /><!-- 1upcrlf2 -->Mayer High School Wildcats football coach Rick Lashley stands in as the finish line for Luke Vallo, No. 10, and Larry Hawkins, No. 39, during sprint drills in 2010 pre-season practice. Lashley said Mayer is changing some of its defense and offense schemes this season.

The Mayer football team just finished its two-a-day training camp this past week and heads into the 2011 season with high hopes for senior quarterback Grant Samsill.

"I'm hoping Grant Samsill comes around at quarterback," MHS coach Rick Lashley said. "He went to a few camps and he started to get a little better; he just needs to continue to work."

Samsill, who completed 74 of 145 passes for 1,188 yards with 16 touchdowns and six interceptions last season, was one of the team's leaders in the weight room this summer.

On defense, Mayer is changing some of its schemes, along with multiple personnel changes.

"We started implementing a new defense and we are basically the same offense, but we are tweaking some stuff," Lashley said. "We've also been working on some different blocking schemes."

The Wildcats, which finished the 2010 season with a 7-3 overall record and 4-2 in the division, return running back David Akerson, offensive lineman Landon Smith and wide receiver and defensive back Lucas Coldsmith.

Lashley wouldn't say whether he thought this year's team was better than last year's, but he did say, "It just depends on how the kids come out and play... We are taking it one week at a time."

The Orme School football program, which starts practice next week, will likely undergo some major changes in 2011, as former coach Ricardo Olivares is no longer with the school.

Charles Schmitt is set to take over the head coaching position.

The team also lost two of its top players to graduation in Alfonso Broom and Theo Turner.