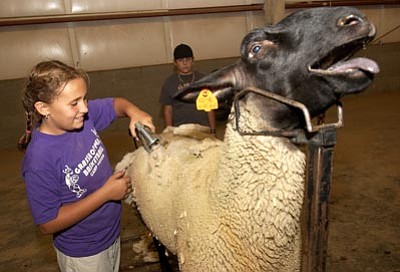 Just this past week, 4-H Club members and other fair exhibitors heard there would be no Yavapai County Fair for the first time since World War II. However, some community-minded people think that's unfair, so they have banded together to bring the "County Un-Fair" event to Prescott Valley.

"It was an unfair shake, and we'll do the best job we can do in this short period to bring a scaled-down fair," said Lew Rees, director of marketing and publicity for the Fain Signature Group, which is involved in the effort.

The event will take place at Tim's Toyota Center during the same time the county fair was scheduled, with the carnival opening Thursday, Sept. 29, and the "Un-Fair" taking place Sept. 30-Oct. 2.

The fair has taken place at the Yavapai Downs and adjacent property since it moved to Prescott Valley in 2001. But now the bankruptcy trustee won't allow the fair to operate there while it's in receivership, fair officials said. The result was hundreds of disappointed 4-H and other youth exhibitors.

A group of businesspeople met Thursday evening in Prescott Valley to announce the event that essentially will be a fundraiser for future Yavapai County Fairs. Included among them were Bill Fain, Brad Fain and Rees of the Fain Signature Group, Yavapai Fair Committee member Phil Bybee (The Yavapai County Fair Association has changed its name to the Yavapai Fair Committee in an attempt to separate itself from the bankruptcy proceedings), and Tim's Toyota Center General Manager Gary Spiker.

The five said they had been working with other community members to see if they could conduct a smaller fair event at the events center property, with the emphasis on bringing back as many of the youth events as possible.

Bybee said while the Yavapai Fair Committee has not officially sanctioned the Un-Fair at this time, the committee is supporting and promoting it, and its superintendents and other volunteers will be involved.

Thirty-eight of the 40 food and other vendors that already were signed up for this year's county fair have agreed to come for the Un-Fair, Bybee said. In fact, the vendors have said they want to have a theme of "community unity."

Most of his exhibit department superintendents are also on board, Bybee said. Spiker said he has been in contact with the Royal West carnival and it will return. Additionally, the organizers will work to bring local talent to the main stage during the event.

Spiker said several local businesses, such as Kooiman Realty, Galpin Ford, Patriot Disposal, Hampton Inn & Suites and Affinity RV, have offered to help any way they can. That's a good thing, Bybee said, because the "Un-Fair" will start off with just about nothing.

Bybee said the bankruptcy trustee has allowed the use of the fair's equipment for the Un-Fair. Spiker said a lot of people are ready to volunteer to move that equipment to Tim's, including some of the 4-H kids who are eager to be able to exhibit their animals and projects. All day Friday, he said, people were calling to volunteer their assistance.

The group said they want to make it clear that the intent of this year's event is not to "take over the fair" or permanently move it, but rather to keep it alive and return it to its home at the fairgrounds next year. They want everyone in the county to be involved, and invite anyone who wants to help out to call.

"The key thing is that we saw the value in the fair, existing for many years at the fairgrounds," said Brad Fain. "We see this as a temporary situation, and we wanted to step up to help out this year. This is a unique opportunity to put on a special event for the Fair Committee so that we can ensure the fair will be back at the fairgrounds. They have to go through their system and their process, and when they get that sorted out, then we'll move it back there. We really think we can put on a great event.

"We're going to do everything we can for the kids. They work on their projects every year and submit them to the fair, and this year they don't have that. The carnival is in; now we need to give a place to the kids to do what they do every year."

"This isn't the county fair," said Bill Fain. "But it's going to be as close a replica as we can make it this year."

Angela Teskey, club leader for the Lonesome Valley Wranglers 4-H group, which has 70 members from Prescott Valley to Cordes Lakes, said she is excited to hear that some kind of fair event will go on.

"I think it's good news. My 4-H members were really looking forward to it, and some of the adults were hoping to enter their canning and other projects, too," she said.

Teskey said she knows it will take some hard work to put the event together in seven weeks, but she isn't daunted.

"Maybe it took them saying we're not having the fair for people to say, 'This is important to us.' I think it's a great solution for now. The 4-H motto is Learn by Doing, so maybe this will be a really good thing. It'll be a challenge for sure," she said.

Her 4-H members have prepared projects not only with animals, but in photography, cake decorating and other areas. Teskey was eager to contact them and tell them they will have a place to exhibit their skills.

"I'll be happy to get the word out. Whew! That's awesome!" she said.