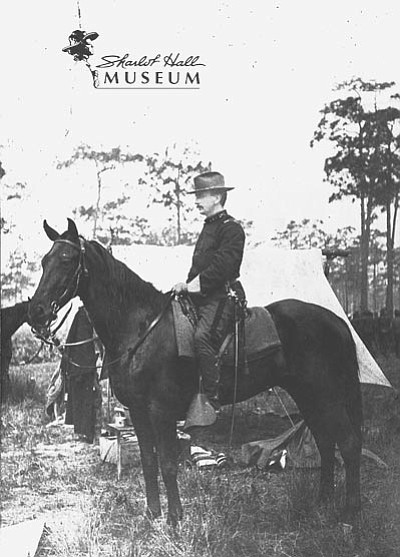 The Yavapai County Courthouse Plaza in Prescott proudly displays a heroic statue of a Rough Rider. Most residents and visitors to the city associate the statue with Capt. William Owen "Buckey" O'Neill, the city's favorite hometown hero.

Sharlot Hall Museum Director John Langellier said that, while most people assume the statue is of O'Neill, "it is really a generic Rough Rider."

His nickname came from his tendency to "buck the tiger" (play against the odds) at faro or other card games.

O'Neill was born Feb. 2, 1860, although there is some confusion as to where. The Arlington Cemetery archive lists his birthplace at St. Louis, Mo., while other sources list it as Washington, D.C.

Langellier explained that O'Neill, like most people at that time, was born at home and "paperwork was not of the utmost importance. No one really knows where he was born."

It is known that he moved east with his family and graduated from the National Law School in Washington, D.C.

As a young man of 19, O'Neill was looking for action, and he headed for the Arizona Territory in 1879. He settled in Tombstone in 1880, where he went to work for the "Tombstone Epitaph" during the days of the Earp brothers, Doc Holliday and the Clanton-McLaury Gang. He may have been the man to report on the scene at the famous shootout at the O.K. Corral.

O'Neill left Tombstone shortly after the gunfight and moved to Prescott, where he continued his journalism career.

He became captain of the Prescott Grays in 1886, the local unit of the Arizona Militia. The Grays stood as an honor guard at the hanging of a murderer. When the trap door fell, O'Neill fainted, which caused him severe embarrassment. When he wrote a story called "The Horse of the Hash-Knife Brand," a member of a posse admitted to nearly fainting at the hanging of a horse thief.

O'Neill married Pauline Schindler in April 1886. They had one son, who died shortly after his premature birth on Jan. 1, 1887. In October of that year, they adopted a second son, Maurice.

In 1888, while serving as Yavapai County judge, O'Neill was elected county sheriff.

When his term was up, the residents of Prescott unanimously elected him mayor.

In 1898, war broke out between the United States and Spain. O'Neill joined the Rough Riders and became captain of Troop A. Although he tried to make an entire regiment of Arizona cowboys, only three troops were authorized.

On June 25, 1898, the Rough Riders saw their first action. O'Neill led his men at the front of the line in the Battle of Las Guasimas, capturing the Spanish flank.

During the battle, he saw several men across the road. Believing them to be Spanish, he shouted, "Hostiles on our right. Fire at will." It wasn't until after the firing had ceased that he learned the men were Cuban rebels.

Theodore Roosevelt, the commander of the Rough Riders, wrote about the death of O'Neill: "The most serious loss that I and the regiment could have suffered befell just before we charged. O'Neill was strolling up and down in front of his men, smoking his cigarette, for he was inveterately addicted to the habit ... As O'Neill moved to and fro, his men begged him to lie down, and one of his sergeants said, 'Captain, a bullet is sure to hit you.' O'Neill took his cigarette out of his mouth, and blowing out a cloud of smoke laughed and said, 'Sergeant, the Spanish bullet isn't made that would kill me.'..."

O'Neill was buried at Arlington National Cemetery May 1, 1899.

The romance surrounding O'Neill lives on. In fact, Langellier said his legacy is that blending of the "historical West and the West of imagination. O'Neill embodied the real and legendary West into one person. He was a true romantic hero."