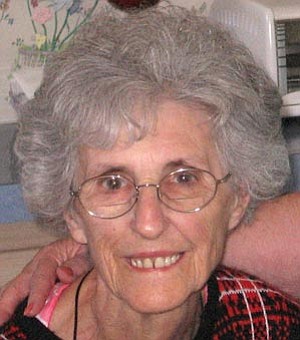 Mary Lou was born in Prescott, Ariz., on Aug. 6, 1931. She died in Prescott on April 27, 2011. Mary Lou was a graduate of Prescott High School, class of 1949. After her marriage, she lived in California for much of her adult life. She returned to Humboldt, Ariz., after the death of her husband of 45 years, Charles O'Hagan, of Mayer, Ariz.

Mary Lou was a member of Humboldt Bible Church. Since returning to Arizona, her greatest joy was her great-grandchildren. She will be missed by her family and extended family of nieces, nephews and friends. The family would like to extend a special thank-you to her friend, Lupe Celaya, and the nurses at YRMC (both east and west) and the staff at the Marley House for their special care and kindness in her final days.

A memorial service for Mary Lou will be at 2 p.m. on Saturday, April 30, 2011, at the Humboldt Bible Church. In lieu of flowers, the family requests donations be made in her name to I.R.I.S. P.O. Box 952 Humboldt, Az 86329. Hampton Funeral Home was entrusted with the arrangements. Please visit www.hamptonfuneralhome.com to sign Mary Lou's guestbook.