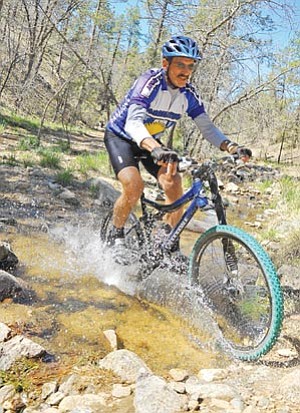 In Steve Becker's world, there's no such thing as a typical day.

Becker, a modest and soft-spoken real estate agent, runs, bikes, swims, kayaks, rides his custom motorcycle, sails and flies planes. And that's just a few of his many hobbies.

Becker, 60, is also known in the Prescott community as the "Oldest and Fastest" on a mountain bike.

A Prescott resident for 30 years, Becker is widely considered one of the top mountain bikers in the area, and has competed in every Whiskey Off-Road event since the inaugural 2004 race.

"I've done every one of them, that's my claim to fame," he said. "The first one I coyotied, because there were only 200 riders in the field and it was filled up, so I just did it anyways."

Becker has won the Men's Masters 45 and over race four times out of the last six years.

In comparison, his best times were only 20 minutes off the fastest of the Men's Open times (19 to 44 year olds).

"You are pretty much pushing your limit without going over it as much as you can," he said.

Becker plans on competing in the 50-mile Whiskey Off-Road race again this year, and trains on his bike two to three times per week, riding 20 to 40 miles per session.

He also runs multiple times each week, and as a warm up for the Whiskey Off-Road, he competed in a 58-mile grass roots race that circled around Prescott.

"I try to do something every day," he said.

Becker, who knows the Whiskey trail as well as anyone, said its one of the toughest races he's competed in, "It's right up there."

"The race is exceptional hard," Sadow said. "It has really, really long sustained climbs and they can be very steep at times. Even some of the descending, most think you can just coast downhill on a bike, but due to the nature of these trails, some of them are harder to go down than up because its so rocky.

"It's a long event. This is an endurance event. Even the weekend warrior that just rides once a week or once a month that comes out and does the 15-mile event, they will still be tested."

Make no mistake about it; Becker isn't only a weekend warrior. He's out to win.

A competitor at heart, Becker has only one goal in mind, "Just finishing as well as I can and pushing myself to do the best I can."

You can see Becker as well as many other local riders in the 50 Proof Start on Whiskey Row in downtown Prescott on Saturday, at 7:30 a.m.