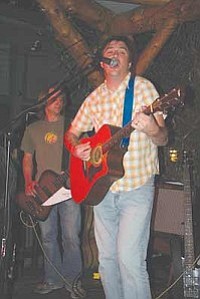 So what about after you hang up your bike for some R&R? Go dance! One stage. Four bands. 10 a.m. to 8 p.m., south lawn of the Courthouse Plaza on Saturday. Soak up some spring downtown sun while riders cross the nearby finish line. And there's a canned food drive on site for the Yavapai Food Bank, so please bring at least two cans.

"The Ikners themselves have a different kind of recording model for their self-described 'indie-pop original songs.' They don't have a band, but hire musicians for each recording. At home, they record the chord structure and vocals.": AZ EDGE, NOV. 4, 2010. The husband-wife duo won Outstanding Musical Artist for 2011 at Prescott's own Buckey Awards. Link to samples of their new EP at http://dutchholly.com/.

One-of-a-kind L.A. duo that pairs Kristian Dunn's 1977 double-neck guitar/bass and floorboard symphony with drummer Tim Fogarty. Their video "My Only Swerving" passed 325,000 views on YouTube, and their current tour of West Coast instrumental rock brings them to Prescott by way of stops in Breckenridge, Colo., Las Vegas, and the Muddy Waters Café in Santa Barbara. The road warriors hit the Prescott stage at 2 p.m., 19 hours after taking a stage in Chicago to cap a run of six gigs in six days in five states.

Look for things to get decidedly louder when the festival headliners plug in come early evening. The trio of David Butler, Ed Shuttleworth & Alan Beavers bring their bone-chilling alternative-fused blues from Granville, Ohio. [Check out the song "June '71" for the Owls at their snarly best. Link available at http://www.reverbnation.com/blackowls]. They're "a mixture of psychedelic blues and glam-punk," one reviewer wrote. If you see one live band before April ends, see The Black Owls. After the Whiskey Off-Road, the Owls are back in Ohio for three shows in May.