Editorial: It's not difficult, just slow down 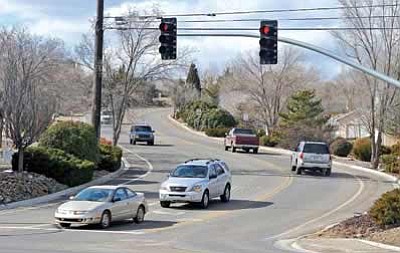 Matt Hinshaw/The Daily Courier<br>Vehicles travel up and down Rosser Street near the intersection of Highway 89 Feb. 2, 2010, in Prescott.

The most prudent and economical way to slow drivers down on both Rosser Street and Copper Basin Road is for drivers who use these thoroughfares to lighten up on the gas pedal.

Prescott is a far cry from Arizona's territorial capital days when Robert Groom laid out downtown streets on the bottom side of a frying pan, as legend has it. Old-timers recall when the Black Canyon Highway was dirt, navigating Yarnell Hill was tricky, Highway 69 was a two-lane nightmare, Willow Creek Road was dust and the Whipple-Montezuma connector didn't exist.

Those days are long gone, fortunately, yet growth and continuing influx of people and their cars have demanded improvements to the road system not only to accommodate more cars but also so that people can get places more conveniently.

Drawbacks are that both Rosser Street and Copper Basin Road, for example, carry heavier traffic than anyone could have anticipated even 20 years ago.

When Rosser Street connected Willow Creek Road with Highway 89, the City of Prescott installed calmers on portions of the roadway to inhibit speeders.

Copper Basin Road underwent massive improvements so that cars could move more smoothly, especially from neighborhoods in its farther reaches to downtown Prescott.

Now, as the City of Prescott plans improvements on Rosser through the Cliff Rose subdivision, the issue of safety has come to the surface again, debating traffic calmers of some kind or no calmers at all. The cost of time alone that has gone into the discussion and study of calmers on the imminent Rosser Street improvements would likely raise the hackles of many taxpayers.

On the other side of town, residents in the Copper Basin Road area want two more stop signs to slow drivers down. The city has recorded speeds of 34- to 35-miles-per-hour eastbound among the "85th percentile" of drivers on Copper Basin Road.

During the City Council's dialogue about adding two stop signs on Copper Basin Road, Councilman John Hannah noted that drivers speed on many city streets, including Willow Creek Road where he lives.

The cost of stop signs is minimal compared to the expense of installing calmers, which carry multimillion dollar price tags.

Obviously, dollar signs are plastered all over methods to get people to drive the posted speed limits.

You will save the cost of a pricey speeding ticket, and taxpayers won't have to bankroll calmers and speed bumps to slow you down.