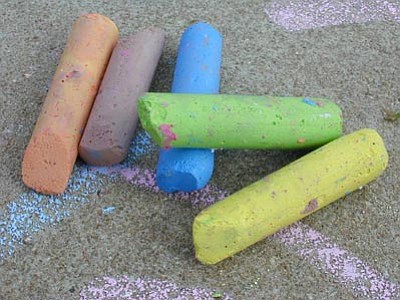 "What on earth is this world coming to" is the age-old reaction to behavior that astounds us - be it high crime or something that seems so petty we can't believe that anyone would do such a thing.

This past weekend, a special event, Chalk It Up! one intended for all ages, took place in downtown Prescott.

Hosts of people turned out to enjoy two days of a tradition that has its roots in street painting, an art form that dates back to 16th century Europe. Historically, people in Italy knew these itinerant artists as I Madonnari because they drew images of the Madonna on pavement to make extra money after their day's work was complete. The Brits call them "Screevers" and in Germany they are "Strassemaler."

Street painting eventually caught on in the United States, gaining notoriety when "Sidewalk Sam" chose streets of Boston as his canvas in the early 1970s. Today, street painting festivals around the world draw thousands of people to watch artists create their masterpieces in pastel chalks on paved ground.

Prescott's Chalk It Up! now three years old, hasn't such lofty goals as the street painters who have turned their work into a recognized art form. Organizers of Chalk It Up! mean for the event to be a fun outing for the whole family to enjoy.

As good fortune would have it, the weather was beautiful on the weekend of April 16 and 17 so that scores could converge on the parking lot of Summit Bank and draw to their hearts' desire in the spirit of a vintage art form. With plenty of music as a backdrop, young and old, budding artists and pros alike, "laid down their art" on asphalt for two days in spring's sunshine and fresh air. Participants paid not a penny to join in, and they even got their chalk for free.

Chalk It Up! and all the festivals this town can boast nurture Prescott's soul. They bring the community together in camaraderie and help us remember what a great town we call home.

Until, that is, someone comes along and throws a damper on the joviality of what Chalk It Up! brings to the community. Unfortunately, that happened this year when an unknown person took a cash box full of $500 in sales from soda, water and extra boxes of chalk from the event's registration tent.

The theft "is so disheartening to all of us," said Chalk It Up! organizer Sharon Nordyke.

Yes, it is disheartening, but there's a lesson to be learned, too.

Nothing is safe anymore, so beware of the people who would betray our trust.

Parking lot masterpieces: Chalk It Up! returns April 20-21
Chalk it Up Prescott turns pavement to art
Chalk It Up! set for April 16-17
Chalk It Up! Prescott returns for sixth year of art
'Chalk it Up!' outdoor art fest is this weekend in Prescott