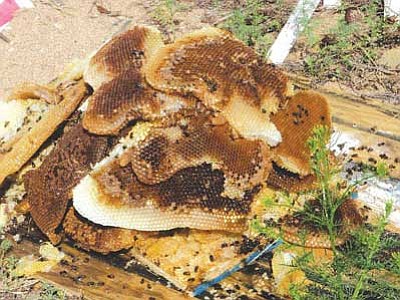 A large hive of suspected Africanized bees was under the flooring of a shed on Donna Hernandez’s property in Prescott Valley. Beekeeper Rex Hoover arrived Saturday to rid her of the bees.<br> Courtesy photo

Rex Hoover has been a beekeeper for only a year, and experienced his largest hive ever Saturday in response to a complaint from a homeowner.

Hoover said he sustained at least a dozen beestings. He added he typically endures no more than two stings when he goes out on calls once or twice a week to rid homeowners of pesky bees.

The hive housed a minimum of 250,000 bees, while the typical hive has 150,000 bees, Hoover said. He also counted 18 drones, which are male bees with the sole purpose of breeding.

"I smoked the bees with my smoker," Hoover said, adding that makes them fear the hive is on fire and causes them to go deep inside the hive and gorge on honey.

The smoke makes it easier to control the bees, and Hoover was able to extract more than 2.5 quarts of honey, he said. He used a household poison from Hernandez's house to kill the bees to that they would not threaten her and her family.

He said he could tell the bees were Africanized - the descendants of bees that escaped from an experimental breeding in Brazil in 1957 - by their behavior.

"You can kind of almost tell by the way they flap their wings," Hoover said. "You can hear the difference. The wings are beating a little faster. And they were extremely vicious. Those things went after me like you would not believe."

Hoover had planned to relocate the bees until they attacked him, said Hernandez, who said a bee stung her on the head while another bee stung Hoover's son, Bryce.

Hoover said, "Donna was so scared of what these bees would do to her dog and her."

In most cases of residential bee hives, experts advise homeowners to call a beekeeper to have the honey bees professionally relocated rather than kill the bees. If you find a bee hive on your property, you can call the Yavapai County Extension Service at 445-6590 to get a list of beekeepers who often will remove the bees for little or no money in exchange for the valuable queen bee.

Hernandez, who has lived on the property for 17 years, said she contacted Hoover after a neighbor told her daughter, Kiara, that he believed a hive was on their property.

Hoover said he found the bees after Hernandez told him they were near the shed and he observed their flight pattern. He later found the entrance to the beehive on the shed.

Hernandez said, "We ended up cutting the floor of the shed to get them out."

Africanized bees also build hives in tires and trees, but they prefer sheds and eaves because they offer more seclusion, Hoover said.

Complaints about bees are more common in spring and summer than during fall and winter, said Charlie Cook, assistant chief and fire marshal for the Central Yavapai Fire District, which serves the Prescott Valley area.

"We will not kill the bees unless they actually threaten somebody," Cook said. He added firefighters have used a foam solution that suffocates bees that are a threat to people.

He urges homeowners to call a beekeeper if bees nest in a well house, water meter, an attic or other places where they do not belong. He recommends treating beestings by applying a meat tenderizer with water, which will disintegrate the stinger.