New Frontiers discontinues the use of plastic bags 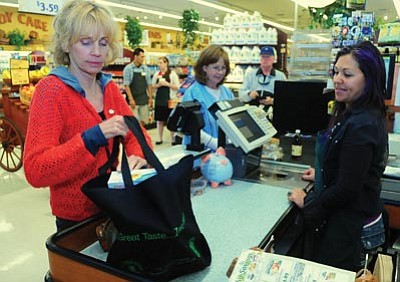 A local grocery store chain is making a move that some would say is bold and others would say doesn't go far enough.

Beginning today, New Frontiers Natural Marketplace is discontinuing the use of plastic bags at checkout stands in its Arizona and California stores.

Jake Collier, vice president and co-founder of the natural food retailer, sent out a news release explaining that the move to remove plastic bags came about after more than a year's consideration.

Collier said the chain was already cutting back on plastic bags in their stores. But seeing a bunch of plastic bags stuck in a fence while recently driving between two stores made an impression on him to make the change.

"We discussed it with many of the people in our company and everyone agreed that we need to continue in our ongoing commitment to take better care of the Earth and each other and further improve the quality of life in our communities and in our world," he said.

The move means an additional cost to the chain because paper bags cost more than the plastic option, but it's an expense New Frontiers is willing to absorb, according to Collier.

"The hope here is that by taking this position it will help more people become more aware of reusable bags and further the understanding of how our choices affect the environment," he said.

What this means for New Frontiers customers is that they can get paper bags at the checkout counter, bring their own reusable bags or choose to buy reusable bags while shopping at the store.

"I think our customers realize the reason for doing this," he said. "They're appreciating our efforts too."

Consumers can also shop at Albertsons, Fry's Food Stores or Safeway in the tri-city area and forego plastic bags.

A company spokesperson with Albertsons said they don't comment on competitor's moves.

Safeway Spokesperson Cathy Kloos pointed out via email that customers can bring their own reusable bags or buy them at their stores.

When asked if Safeway has given any thought to discontinuing using plastic bags at checkouts, Kloos said it's not something they are considering right now.

Kloos wrote that Safeway conveys the message to reduce, reuse and recycle with its customers in signage and advertising.

"We are seeing a reduction in the use of plastic bags as more and more customers purchase and use reusable bags," she wrote.

Lynn said they prefer consumers to use reusable bags, but sometimes they forget them at home or in the car and Fry's is simply giving their shoppers options.

"We give them choices and, at the end of the day, that's what Fry's is about," she said.

Lynn said Fry's recently went from a white plastic bag to a brown bag with a higher percentage of recycled plastic in it.

That said, Lynn said customers control the products they carry.

Albertsons, Fry's and Safeway are among 10 major retailers participating in the bag "central station" plastic recycling bag program. Tim McCabe, president of the Arizona Food Marketing Alliance, which is the trade association that represents food retailers statewide and is behind the recycling program, said it began about four years ago.

The way the program works is consumers put their extra plastic bags in bins at participating stores, who transport them to their distribution centers and take them to a recycler which transforms them into playground equipment, a wood decking substitute or more plastic bags.

McCabe said the volunteer program recycled nearly 1,600 tons of plastic bags in 2010. He added that approximately 15 to 20 percent of shoppers bring reusable bags into stores. "We're very happy with the progress of the program," he said. "Right now it's just educating the consumer as to what to do with the plastic bags.

"I fully applaud the move to discontinue giving away plastic bags to shoppers for environmental reasons," he said. "But not doing the same for paper bags demonstrates a lack of critical thinking."

Crews said it doesn't achieve a "sustainability outcome," and he would like to see retailers offer more incentives to consumers to use reusable bags or make paper and plastic bags more costly to consumers.

"(New Frontiers is) right in raising the issue but they should take it more head-on," he said. "The more sustainable choice would be to offer both, but make it very costly to choose either plastic or paper over a reusable bag."

Consumers are lazy when they don't have incentives to make some changes, according to Crews, who said he would like to see retailers charge consumers 25 cents for each paper or plastic bag.

"Anything shy of that would be token, I would say," he said.

Fry's to phase out plastic bags at all its grocery stores over 7 years
Paper, plastic ... or bring your own?
Paper or plastic? ... or neither
Companies fight plastic use despite state’s reluctance to do so
Should plastic bag use be a choice?