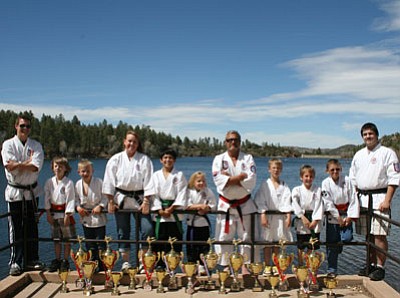 The three-day USKA National Karate Championships take place each year in Albuquerque, NM. With multiple events and divisions, past national champions, current regional, and state champions compete against each other. Nationals are by invitation only, and only the top three in the states are eligible to compete.

Many of this year's divisions had up to 30 competitors looking to capture the national title. This year students and instructors from Shinpu-Ren Family Karate brought home nine of the coveted titles.

Seven-year-old Ceily Plucinsky triple crowned by bringing home three titles of her own. Sensei Travis Roach captured two Titles. Overall the 10 competitors returned home with 28 top 4 wins. The students and instructors would especially like to thank their many generous sponsors who helped them accomplish their goals this year, including Kiwanis, National Bank, Antelope Lanes, Fry's and the people who stopped by the yard sale, got their cars washed, or sponsored the Kick-A-Thon.