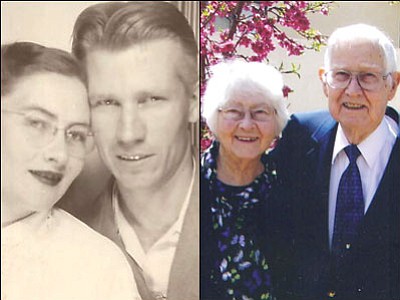 James "Pete" and Della Newnum of Prescott Valley celebrated their 60th Wedding Anniversary with family and friends at a dinner and party. They married in Phoenix April 10, 1951, and honeymooned in Northern Arizona.

After Pete retired as a printer at the Arizona Republic/Phoenix Gazette and Della as a media technician at Desert Shadows Middle School in Paradise Valley, they moved to Prescott Valley where they have lived for 20 years.

The Newnums have a daughter Marla, 2 sons: Paul (Cindy) and Scott (Leah), 11 grandchildren, and 13 great-grandchildren.

Mr. Newnum was a U.S. Navy Seabee in the South Pacific during WWII, and celebrated his 89th birthday the day after their anniversary.