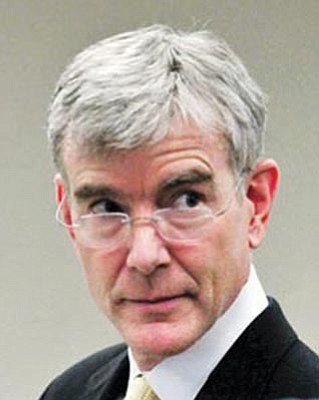 CAMP VERDE - The judge in the Steven DeMocker murder trial on Monday set a date for a retrial to begin and is allowing just over seven months for the trial to wrap up.

Judge Warren Darrow said he would start the retrial Sept. 7. He allotted 30 weeks, expecting to hold court alternating between three and four days a week, which, if it ran the full time available, would put the end of the trial in March 2012. Darrow did not decide in which court facility the trial would be held. The prosecution favors the Prescott courthouse; the defense, Camp Verde.

As he usually is, DeMocker was in court. Before his case was called, he sat in the jury box with other prisoners who wore orange jumpsuits and shackles; DeMocker was dressed in a sport coat and slacks and was not handcuffed. He chatted with the sheriff's deputies and conferred briefly with defense attorney Craig Williams.

DeMocker, 56, faces a second trial after his first - in which he was accused of beating to death his ex-wife in July 2008 - ended in a mistrial when his defense team quit. The new attorneys said they need more time to prepare, and Darrow decided to end the trial last November.

Darrow set a May 2 date to hear oral arguments on a defense motion to release DeMocker on his own recognizance, lower his bond amount, or move him to the Coconino County jail. Last week, Williams filed a motion that claimed DeMocker was being held in solitary confinement without justification, and that, in fact, there was no reason to keep DeMocker in jail at all. Prosecutors said they had not yet had time to file a response.

Chris Moeser, attorney for Western News&Info, Inc., parent company of The Daily Courier, again argued for the release of sealed documents in the case, pointing out that it would be relatively easy to redact - or mark out - any sensitive details. He asserted that, given the length of the trial and the fact that taxpayers are shouldering the financial burden of the proceedings, it was in the public's interest to allow the release of as much information as possible.

"The court should use the least restrictive method possible" in protecting sensitive details, Moeser said.

Asked what, specifically, WNI wanted to see, Moeser answered, "We don't know, because we don't know what is in there." By way of example, however, he cited the sealing of information about the departure of the original defense team as something that should be opened.

A possible solution was offered by defense attorney Greg Parzych, who said while he couldn't discuss the contents of sealed documents in open court, he would be willing to supply Darrow with a list of documents and the contents that he believed could be opened, as long as the list itself was sealed.

Darrow said he would wait to see the list before making a decision, but said his "initial instinct" was to do redactions and then release as much as possible.