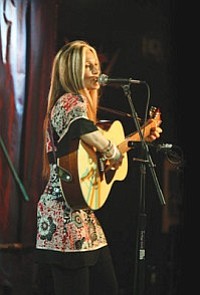 Courtesy photo<br>Linda Cushma is among the dozen-plus musicians playing this weekend’s “Kate’s Thing” festival in Cottonwood.

PRESCOTT - Kate "Kactus Kate" Woods is ready to party for her first Kate's Thing Women's Music Festival in Cottonwood. The festival is all about female bands or bands fronted by women.

"I like all kinds of music, so we've got a little bit of everything," Woods said, which includes Americana, indie, country, rock, punk, funk, jazz, blues, bluegrass, world and dance.

The music festival starts at 11 a.m. Saturday at Kactus Kate's Saloon, 929 N. Main St., in Old Town Cottonwood. The music starts outside and ends at 1 a.m. inside.

"I've got Pinal Street closed from 11 a.m. to 7 p.m. and we're bringing in hay bales and trailers, and then everything moves inside at 7," Woods said. "I'm doing a rain dance in the morning just to be safe."

The band lineup includes such diverse bands as the Dry River Yacht Club, miss ralo and bipolar coaster, Barefoot & Pregnant, and One Foot in the Grave.

"One Foot in the Grave is a senior citizen punk band," Woods explained. And then there's Arctic Black.

"Throw in a beautiful female front with an authentic rock and roll voice, outlandish fashion sense with modern interpretation and you have Arctic Black," said band member Richard Jones.

"We just wanted an event to show some of the women musicians," Woods said. "There's lots of men's things, but no one's doing anything for the women."

"I've known Kate for years," said Ralo Heiniemi, who has been producing music festivals and booking bands in and around the Prescott-Jerome area since the mid-1990s. In addition to booking bands, she also is a musician and frequently plays at bars and clubs around the county. "I stopped in one day to see Kate, and she said she wanted to do a women's festival.

"Most of the bands that are playing I've worked with at one time or another. My passion is independent music festivals."

Woods opened Kactus Kate's in 1996, and established herself as community fixture in Old Town Cottonwood.

"When I moved, there wasn't any live music. You gotta have that in a bar," Woods said. "Everyone's doing music now."

Woods has three stages for the festival: outdoors on Pinal Street, on the back patio, and the bar stage. She'll be cooking and serving "the usual bar food" throughout the festival.

Heiniemi, who is better known to entertainers as simply "Ralo," said that Kactus Kate's is "the oldest pub in the area."

"I moved here from Colorado and was very familiar with cactus," Woods said explaining the name of her bar. "I liked the sound of Kactus Kate's. KK works for me."

When Heiniemi started booking bands and word of the women's festival got out, Woods said that people started calling her and asking, "What's this Kate's thing we keep hearing about? And that's how we came up with 'Kate's Thing.'"

"This is the first of many events to come to Kate's," Heiniemi said. "For Kate's Thing, people can expect to hear the finest female acts in the state. The best of the best."

Tickets cost $10 at the door and you must be at least 21 years old to attend. For more information, visit Kactus Kate's Saloon on Facebook or Heiniemi's website at northernarizonaproductions.com, or call 308-3152.

Women's musicfest promises best of the best female bands
Can you play?: The art of booking bands
BeckyFest: It's all about the women
Subculture Superstars find home at Pinion Pines
Get your Americana on! Gold King Mine festival presents country, bluegrass, rock, camping, firedancers and more