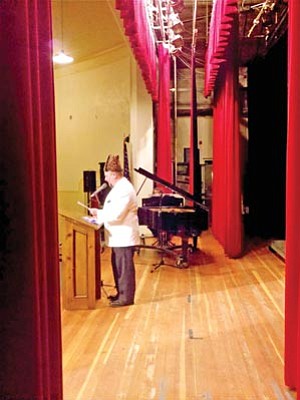 PRESCOTT - Andrew Johnson-Schmit wanted a "warm fuzzy feeling" from the Prescott arts community at the first Buckey Awards, and from all accounts, that's what he got.

"Absolutely there was a warm fuzzy feeling here tonight," said Johnson-Schmit after the ceremony Saturday night at Prescott's Mile High Middle School Hendrix Auditorium. "I heard it, saw it, felt it in the room, in the lobby and at the Raven Café after hours."

The ceremony was the result of an online contest on the Prescott Arts Beat website.

Everyone from Rich Gregory, the owner of Prescott Coffee Roasters, to Jim Anderson from KAWC National Public Radio station gushed about the vibrant art community in Prescott.

In a nod to cyberspace, while Anderson was on stage, he shot a cellphone photo and sent it out on Twitter. "You're all on Twitter tonight," he said after taking the photograph.

"He called his boss and said, 'We need to do more for these folks down here,' " Johnson-Schmit said referring to the fact that the radio station offered $10,000 of free advertisement.

"I was really, really stunned," said Katie Dean, who won first place for "Outstanding Performing Artist" for her portrayal of Gabriell Wiley, the "Murderess Madam of Prescott." "To say I'm honored is an understatement."

"This community freakin' rocks," said Tres Ikner after receiving the award. Tres is one-half of Dutch Holly along with his wife Jen.

"This was like a lovefest," said Johnson-Schmit on Sunday. "People were posting on Twitter and Facebook all night. They were going, 'OMG, you should have seen this artist.' "

"This is an honor," she said. Drake co-founded the Blue Rose Theater 17 years ago, and has worked steadfastly to promote Sharlot Hall Museum and the theater's presentation of Sharlot Hall and other Yavapai County and Arizona historical people.

"We wanted to give it to someone who is still active in the arts," Johnson-Schmit said. "We didn't want it to be like, 'Here's your award. Now goodnight.' "

Guest speaker Tom Thurman, District 2 Supervisor, said that art has been a keystone of Yavapai County for thousands of years, and noted the rock art of Indians that is prevalent in the county. He donned a fringed buckskin jacket and Davey Crockett hat to relate how Kentuckians brought art to the West, and that art is still alive here.

"When someone asks me what is it about Prescott that I love so much, I say 'It's the arts,' " Dean said.

"It was an eclectic group of everyone that came," Johnson-Schmit said.

"I had a really, really cool personal moment during the awards ceremony," Johnson-Schmit said. "I went out to my car to get something, and I heard someone talking on their cellphone about just winning a Buckey Award.

"That's when I knew it was all worth it. It was a victory for all of us in the arts community."