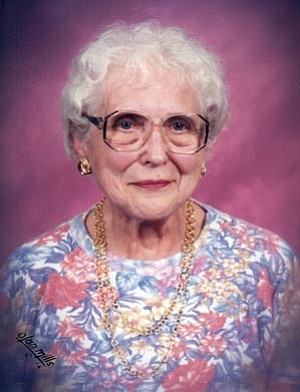 Mildred (Millie) Amanda Wendt passed on to her heavenly home on Monday, March 14, 2011. Millie was born July 24, 1919, to Moritz and Anna (Finke) Goltermann in Lombard, a suburb of Chicago, Ill.

She attended St. John's Lutheran School for eight years and was confirmed there in April 1933. She married Marshall L. Wendt of Elmhurst, Ill., on May 3, 1941. He preceded her in death in August 1989.

Marshall and Millie moved to Phoenix, Ariz., in October 1947, then to Prescott, Ariz., in 1975. They lived in Walker for four years, then at Willow Lake. Millie moved into Good Samaritan Village apartments in 2006. Over a period of 25 years, she worked in retail for Sears and J.C. Penney.

In lieu of flowers, the family suggests contributions to American Evangelical Lutheran Church's music ministry or to your favorite charity.

Funeral arrangements were made through Heritage Memory Mortuary. Condolences may be left online at www.heritagefuneralchapels.com.