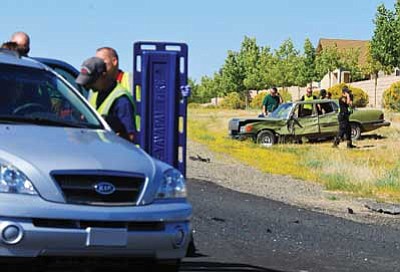 Police responded at 1:26 p.m. to Glassford Hill Road and Granville Parkway, where a 2005 Kia sport utility vehicle collided with a 1980 Mercedes.

Rescue workers took the SUV driver and her two children - ages 5 and 8 - to the East Campus of Yavapai Regional Medical Center for injuries that were not life-threatening, Bonney reported.

The Mercedes driver, a 20-year-old man from out of state, sustained non-life-threatening injuries as well, and was taken to the hospital.

The accident remained under investigation Tuesday, Bonney said, adding police do not suspect the drivers were impaired.

All the adults wore safety belts, and the children were secured in booster seats.