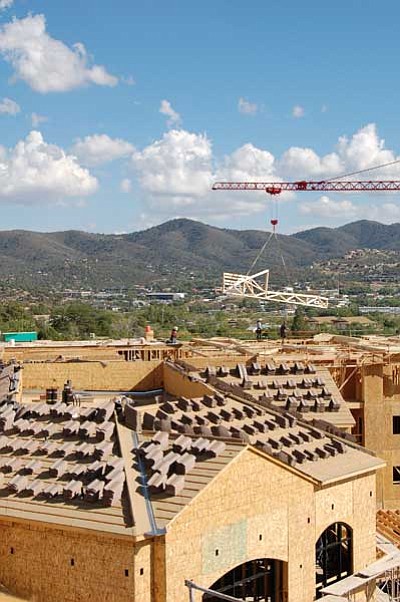 Jason Soifer/The Daily Courier<br>Construction continues at the Alta Vista Retirement Community in Prescott. About 100 people a day are working on the new senior community that’s opening next summer.

A new player in the retirement living arena is under construction in Prescott.

Work began on the Alta Vista Retirement Community on Canterbury Lane in January, with the 132-unit independent and assisted living community set to open next summer.

Maggie Greenwood, community relations director, said the luxury-style senior community will open with many attractive amenities for residents, ranging from units with granite countertops and patios to two gyms, a theater and three restaurants.

Apartment sizes range from a studio at 395 square feet to 1,300 square feet, and Greenwood said they are still working on prices.

Despite the numerous other senior living options already open in the community, Greenwood said that isn't swaying them a bit.

About a dozen people called about the community since their website went online this past week, according to Greenwood, who said the four buildings will ultimately generate about 75 jobs.

"Our goal is to sell choices," she said. "We do think that there is a need here."

Eric Johnston, president of Ahwatukee-based RCS, said some of the larger senior communities in Prescott were at or near full occupancy and some also have lists of people trying to move into them.

Johnston said the local senior living sector has room for growth without taking away from the other communities as that population expands and publications continue to rank the city as a popular retirement destination.

"I think that there is ample market and demand up there for the existing providers," he said. "I think because of their consistently sustained occupancy levels, it is a reflection that there is a need for additional services."

One of those competing communities is Las Fuentes, which is just a stone's throw to the north of Alta Vista.

In early 2009, a lawyer for Las Fuentes fought against the project, which was originally known as The Boulders, because of concerns including topography and potential traffic problems for the community, which sits on roughly 6.25 acres.

The developer and his lawyer argued that Las Fuentes was more worried about competition and that they were bringing jobs and new revenue to the city.

Michelle Watkins, sales and marketing director at Las Fuentes, said the community's occupancy rate is around 99 percent and they have a wait list of about 50 people.

"I think competition is a very healthy thing," she said. "Enough of us are getting older that we'll all be able to get our little share of the market I'm sure.

"We are really fortunate to continue to have high occupancy levels even in this economy."